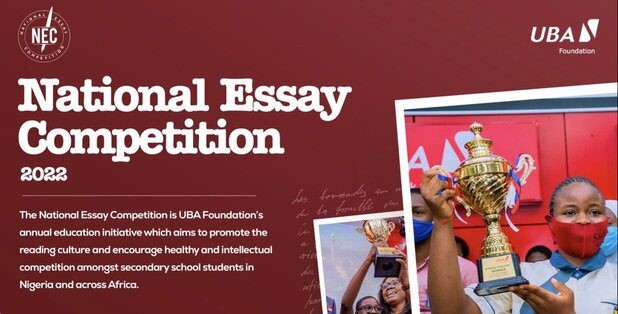 The Ministry of Basic and Senior Secondary Education (MBSSE) and the United Bank for Africa Foundation (UBAF) has launched the 3rd Edition of the National Essay Competition for pupils in Senior Secondary Schools (SSS) across Sierra Leone.

The essay competition offers an opportunity for pupils in SSS to strengthen their critical thinking, civics, and other skillsets relevant for their growth. The winners will be given an opportunity to win a scholarship grant for their university education up to the limits of Le50,000, Le30,000 and Le20,000 for the first, second and third positions respectively.

Topic: Transforming Education requires collective effort including that of families and communities. Discuss specific interventions from families and or communities that can improve quality in education.

“It may seem like just a competition but that is not what it is for us as a ministry; it is an opportunity for students to learn. NEC complements our ongoing work to improve learning outcomes for a positive impact on society. The essay competition offers an opportunity for pupils in SSS to strengthen their critical thinking, civics, and other skillsets relevant for their growth,” Dr. Moinina David Sengeh, Minister of Basic and Senior Secondary Education said.

NEC is a UBA Foundation Initiative that started in 2011 as part of UBA Group’s drive to improve the access to education for the under-privileged across Africa. This year will mark the 3rd Edition of the National Essay Competition in Sierra Leone in conjunction with the Ministry of Basic and Senior Secondary Education (MBSSE). In doing so, children across the country will be given an opportunity to participate in the life changing competition.

Participants must submit their hand-written essays not later than 12th December, 2022 at 5:00 PM GMT at any of the 16 MBSSE district offices, at UBA Bank headquarters located at 15 Charlotte Street, Freetown, or at the bank’s branch locations anywhere in the country. All essays submitted must include the following details of the participant: Full name, age, town and districts, school name, full name and telephone number of participant’s teacher, full name and telephone number of participant’s parent/guardian, and participant’s essay, and the essay’s word count (number of words used in the essay).

The word count should be between 450 and 500 words, and all essays must have a title. The essays will be judged based on their structure, grammar, illustrations of ideas, and their creativity.

Essays submitted by participants at the 16 district levels will be marked by a panel of academic judges, who will be selected by the MBSSE and UBA. Announcements of the 12 finalists of the competition will be made over TV broadcast, radio and newspaper. The 12 national finalists will be contacted using the information provided in the application for further details and next steps.

Finalists will be supported to travel to Freetown with their teacher, parent or guardian to compete in the final round (travel, lodging and feeding of winners and their supervisors will be provided by organizers).

Finalists will write a second essay, which will be evaluated for selecting the first, second and third place national winners that will get the scholarship grant while all the 12 Finalists who sufficiently defend their essays in a 5 minutes interview with the judges and meet a cut off mark of 40% and above in the second rounds of essay will each receive a laptop. The final round will be broadcast live on a TV Show.