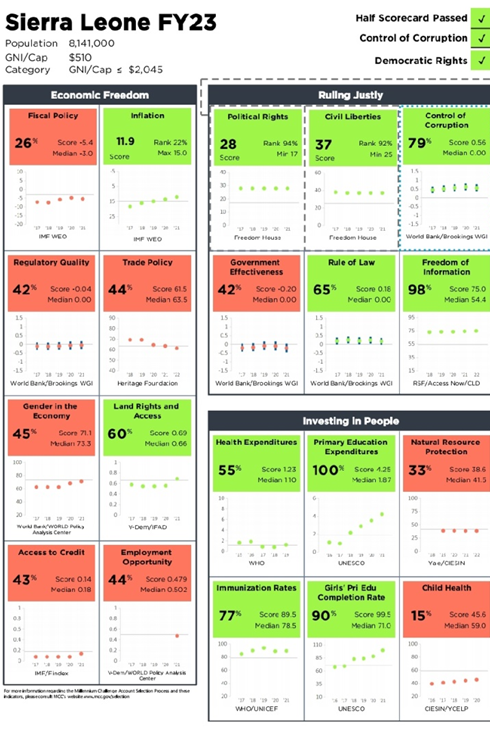 Sierra Leone has passed 11 out of twenty indicators in the Millennium Challenge Corporation scorecard for 2023 Financial Year. The scorecard revealed that Sierra Leone scored 100% in terms of Primary Education expenditure followed by freedom of Information, Girls Primary Education completion rate, control of corruption and immunization rate among others.

The new scorecard recorded enviable gains in the Girls’ Primary Education Completion Rate indicator assessed by UNESCO. At over 99.5% in 2021, Sierra Leone has the highest rate of girls completing primary education than any other West African country for the period in review. On Primary Education Expenditures, Sierra Leone increased spending from 3.61% to 4.3% as a percentage of GDP between 2020 and 2021- the highest increase over a one-year period across all the countries in the lower income pool on the MCC scorecard. For the first time, Sierra Leone also passed the Land Rights and Access indicator. In the category of ruling justly, Sierra Leone passed 5 out of the 6 indicators including the Control of Corruption.

While Sierra Leone did not pass the new Employment Opportunity indicator, efforts are underway to revise and streamline the labour laws to improve the protection of workers and boost inclusivity in the workplace. Further, Parliament has enacted the Anti-Human Trafficking and Migrant Smuggling Act, 2022, thereby increasing the penalties for trafficking and other forms of forced labor. Government of Sierra Leone also anticipates that the passing of the Gender Empowerment Bill will support the creation of a safer work environment, especially for women.