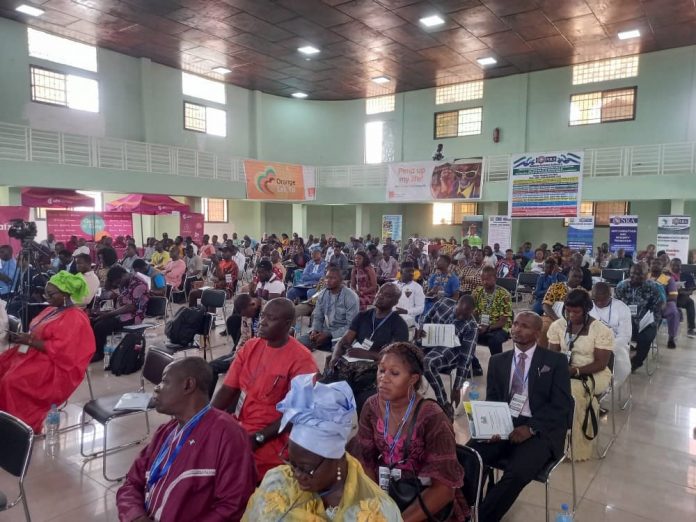 The 2-day discussion, organised by the Ministry of Information and Communications with the theme: “Consolidating Democracy: Our Collective, Shared and Patriotic Responsibility”, was mainly to review the implementation of the Manifesto, considering the Media and CSO being key drivers towards development.

The meeting, which was the third in a series, was held between 25th and 26th November 2022 and over 250 participants from across Sierra Leone were in attendance.

Officially declaring the sessions open on Friday 25th November, the Vice President of Sierra Leone, Dr. Juldeh Jalloh, commended the Ministry of Information and Communications for what he referred to as a wonderful initiative.

He said the event was uniquely designed to not only bring government closer to the people but to put government programmes up for public scrutiny.

He emphasised the need to have a functional state where there is correlation between the State and Society.

“This is a wonderful initiative, the society and the State coming together, which shows that this is a functional State. A functional state that has the capacity to deliver development and a viable democratic space. I am glad to be part of this story” he said.

In a well-prepared address, the Vice President catalogued the achievements of government, with special reference to deliverables in the Energy, Education, Agriculture, Sport, ICT, Infrastructural development, Revenue Mobilization, and governance sectors.

He stated that President Bio has improved access to electricity to about 35% from 16% in 2018, when President took over the reins of power. He talked about the potential increase in access to electricity due to government’s ongoing projects like the seven-town electrification project, which after completion will light up big towns in the entire country.

According to the Vice President, Kenema, Bo, Kono and Freetown are currently enjoying electricity from the CLSG line and that about 50 communities in the rural areas have been powered through solar power grids.

The Vice President also spoke glowingly about Sierra Leone’s continuous passing of the Millennium Challenge Corporation (MCC) scorecards since 2018, which he emphasized was due to President Julius Maada Bio’s approach to good governance, the successful fight against Corruption, transformation in Education, Rule of law, women’s empowerment and the development of the road infrastructure.

In his address, the President of the Sierra Leone Association of Journalists, (SLAJ), Ahmed Sahid Nasrala, hailed the Government of President Bio, calling it a very serious government that has improved the media landscape.

He said he is can proudly assert that there is no journalist in jail for practicing the profession and thanked government for repealing part 5 of the public order act 1965 that deals with seditious libel.

A representative of Civil Society, Andrew Lavallie, thanked the Minister of Information and Communications, Mohamed Rahman Swaray, for such an initiative, saying that, CSOs and Government are partners in the development of Sierra Leone.

“We are not in contention with government but in cooperation and collaboration to ensure national development” he said.

The Minister of Information and Communications, Mr. Mohamed Rahman Swaray, in a brief statement, said that when he proposed this initiative three years ago, concerns about financing the retreat came up but with the support of government and other partners, the Ministry has organised two successful Annual Retreats and is sure this year’s retreat will be billed as the best so far.

The minister said that this year, the Ministry has elevated the discourse as is evidenced in bringing the Honorable Vice President to participate.

“This is in line with President Julius Maada Bio’s call for a transparent and accountable government. We are answering the call for democratic accountability and this annual scrutiny is one of many pathways” he concluded.

The two days of the retreat were filled with several sessions of panel discussions, where MDAs presented their achievements, challenges and plans and were rigorously scrutinised by members of the media and CSOs.