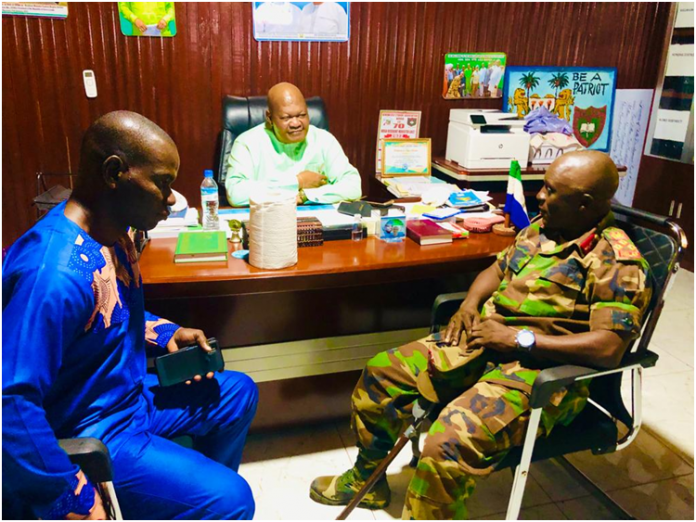 As part of Military routine, the II Infantry Brigade Commander-East in the Republic of Sierra Leone has visited the Minister of State-East Rtd Brigadier KES Boyah.

Brigadier A.S. Bockarie’s visit was to formerly inform the Hon. Resident Minister that he has been instructed effective immediately to move down to the Freetown as the New Brigade Commander for Murray Town Military Barracks.

During his farewell speech at the office of the Hon. Resident Minister-East, Brigadier A.S. Bockarie said he is part of history making after he played a significant role in seeing that the Brigade is once reinstituted in Kenema, Eastern Region.

He furthered that his leadership role in the East was able to restore some sanity in the region especially at Yengah community in the Kailahun district that shares border with Guinea.

He also spoke about his role that he played in working together with the Sierra Leone Police to maintain peace in the region.

Responding, Minister of State-East Rtd Brigadier KES Boyah who was taken by surprised when the news broke out thanked Brigadier A.S. Bockarie for his matured leadership role he played during his one year stay in Kenema.

Without much to say, Rtd Brigadier KES Boyah wished Brigadier A.S. Bockarie good luck and a happy stay in his new office. The short meeting was witnessed by Regional Coordinator for Office of The National Security (ONS).