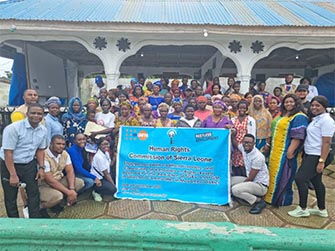 The critical role stakeholders like religious and traditional leaders play within communities cannot be overemphasised as they serve as reference points for national development, cohesion and a bridge between human rights and culture.

In a bid to get them to understand and also build their capacity from a right-based approach in reducing or eradicating incidences of sexual and gender base violence and female genital mutilation, the Human Rights Commission of Sierra Leone (HRCSL) on 1st September 2022, engaged some fifty (50) religious and traditional leaders. These include Soweis in Moyamba district at the NP Hall, Yoyema with support from United Nations Population Fund (UNFPA) through Restless Development

According to stakeholders, there has been marked improvement in addressing sexual and gender based violence in Moyamba district as sexual penetration, sexual harassment, and rape cases, among others, are being adjudicated speedily in court.

A Sowei, Jestina Vandi said: “The Bondo Society is our source of livelihood and it is through that we build the culture of togetherness amongst us. We support the government ban on underage initiation into our society, and also agreed that those above 18 years must be willing to be initiated.”

The women expressed concern for alternative livelihood if they were to quit initiation of women into the Bondo Society. They said their trade is now being done twice a year during holidays in Easter and December.

Madam Patricia Narsu Ndanema, Chairperson of HRCSL  highlighted international and regional instruments that speak to the rights and protection of women and girls, including the Maputo Protocol which calls on states and governments to protect and encourage women to desist from harmful traditional practices. She reminded them that government has the responsibility of protecting and promoting the rights of all, especially women and girls.