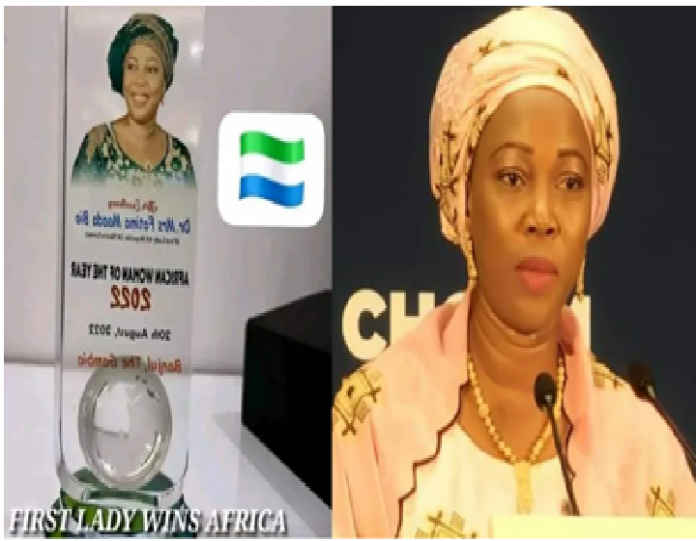 The First Lady of Sierra Leone Mrs. Fatima Maada Bio has been awarded the ‘African Woman of the Year 2022’ by the Voice from Netherlands at an Awards ceremony held in the Gambia past weekend.

The Voice Achievers Award Company at the Sir Dawda Kairaba International Conference Center awarded the Mrs. Bio the African Woman of the year 2022.

The Voice Achievers Awards is established in the Netherlands and it has become a global event attended by hundreds of people.

Organisers of the event said Mrs. Bio epitomises bravery, intelligence and servant leadership, as evident in the massive impact being recorded by her humanitarian and official work across the globe.

They highlighted the rich academic background of the first lady including her graduation from Roehampton University with BA Honours in Performing Arts, which qualifies her as an International Actress and Script Writer.

Mrs. Bio, they said, has led numerous gender, philanthropic and child welfare campaigns even before she became first lady.

The Awards has previously been received by three other first ladies. It is in recognition of Mrs. Bio’s hard work and tenacity to champion issues that matters to Africa, especially rape, early marriage and teenage pregnancy among others.

She thanked the organisers, adding: “This is the time to register the Hand of Our Girls internationally and this will inspire me the more. I’ll continue to be the voice of the voiceless when it comes to issues of rape, early marriage and teenage pregnancy among other issues affecting women and girls.

She said she was happy and humbled to be part of the first ladies to have won the prestigious award.

Previous article
Bio Raps CSOs, Media, Bar Association on Peace Consolidation
Next article
“Resist all forms of corruption in the discharge of your duties”
AYV News