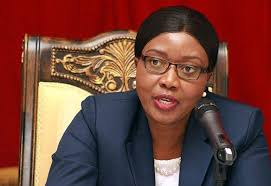 The Prime Minister of Namibia, Saara Kuugongelwa-Amadhila, has recently emerged as the odds-on favourite to become SWAPO’s next Deputy Leader. She is one of three SWAPO bigwigs vying for the much-coveted position. The other two are Pohamba Shifeta, Minister of Environment and Tourism and Netumbo Nandi-Ndaitwah, Deputy Prime Minister and Minister of Foreign Affairs. The significance of this race is that whoever among them comes up trumps in the Congress scheduled for November, is likely to succeed President Hage Geingob. And if, as is been increasingly touted by political pundits and observers alike, that happens to be Saara, then it will be a fitting climax to what has been a fascinating and storied political career. But just who is Saara Kuugongelwa-Amadhila, and why should Sierra Leoneans take interest in her political exploits in Namibia?

Born on 12 October 1967 at Otamanzi in the Omusati region of Namibia to a labourer father and a teacher mother, Saara Kuugongelwa-Amadhila’s childhood experience was analogous to most black Namibians’ born in that era. It was characterised by poverty, violence, deprivation, discrimination, and segregation, among others. However, unlike many in her generation, she refused to meekly surrender to fate and hope for the best. Where others were content with just complaining about their predicaments-their daily terrifying experiences and the ruthlessness of the Apartheid regime, she, on the other hand, was consumed by an insatiable desire to do something about her situation. She knew even then that until something was done nothing was going to change. Thus, emboldened by her sense of purpose and inspired by the mobilisation campaign messages of SWAPO, in 1980, aged just 13, Saara decided the time was right for her to head to Angola and join SWAPO.

Though she was raring to get into the thick of the action as soon as she got to Angola, given her tender age, a decision was immediately made by the leadership of SWAPO to instead enrol her in the Namibia Health and Education Centre in Kwanza-Sul. At the completion of her Primary education there, she was awarded a UNHCR scholarship in 1982 to pursue her Secondary education in Sierra Leone. Saara would spend her first three years in the West African country attending the Koidu Girls’ Secondary School in the diamondiferous district of Kono, Eastern Sierra Leone. She would later move to the capital, Freetown to complete her Secondary education with the St. Joseph’s Secondary School, where she took the West Africa Education Council (WAEC) Ordinary Level exams in 1987, scoring an impressive First Division.

Back in Angola, She had a short stint as a teacher at the Namibia Health and Education Centre in Kwanza-Sul, before leaving for military training at Tobias Hainyeko. She graduated in 1988 as a Political Commissar. During the course of her military training, she served as the Deputy Head for the Female Trainees in her unit. The political education she was imbued with during her training formed the foundation that underpins her strong belief in human-centred development, which informs her policy perspective. In 1989, 9 years after leaving for Angola to join SWAPO, our Comrade returned to Namibia for the elections that led to Independence. And with Independence secured, she worked as a Financial Clerk at the Party Headquarters until her integration into the government as part of the transitional arrangements.

Post Independence, Saara redirected her attention to her personal development in a bid to prepare herself for the task ahead. Consequently, in 1990, she travelled to the USA to read for a Bachelor degree in Economics at the Lincoln University. She graduated in 1994 with a distinction (SUMMA CUM LAUDE). A year later, the Founding Father, Dr. Sam Nujoma rewarded her outstanding academic accomplishment by appointing her Director-General of the National Planning Commission. That appointment was the onset of a political career that has blossomed into what it is today. In her new role, she was charged with coordinating Namibia’s Development Strategy; translating the SWAPO Party’s manifesto into policies to increase prosperity and bridge the gap between rich and poor.

Ultimately, Saara proved instrumental in charting the administrative and economic course of our young democracy, formulating and driving initiatives for the SWAPO Party Government to address development challenges in a focused and sustainable way. Key among these initiatives were the coordination of the formulation of Vision 2030 and NDPs, and the formulation of the National Strategy for Poverty Eradication. These government policies saw GDP and per capita income increase by more than threefold, propelling the country to an upper-middle income category and reducing poverty levels by half. Alas, this remarkable trajectory has, however, been upended by the recurrent droughts and the onset of the COVID-19 pandemic.

It was during her time at the National Planning Commission that Namibians recognised what their visionary leaders had seen in the young lady when they entrusted her with public offices at an early age-an invaluable asset to both country and party. And when in 1997 she was made a member of the Central Committee of SWAPO, there was little doubt she was destined for the top.

Notwithstanding her successes in government and her accelerated rise in the Party, Saara was never going to rest on her laurels; she was still keen on developing herself further, which meant obtaining a Master’s Degree in Financial Economics from the London School of Economics in 1998.

In 2003, aged 36, Saara Kuugongelwa-Amadhila was appointed Minister of Finance by the Founding Father Dr. Sam Nujoma and, subsequently, by President Hifikepunye Pohamba, making her the youngest Cabinet Minister in post Independence Namibia. For anyone else, that would have been quite an unnerving task, but for Saara, whose age belies her experience, it was just one more responsibility added to an already teeming portfolio of responsibilities. Prior to that appointment, she had already served on the Central Committee and National Executive Committee of the SWAPO Party Youth League between 1997 and 2002, was already a member of the National Assembly, the Central Committee of SWAPO, the Politburo and was the substantive SWAPO Party Secretary for Economic Affairs.  Anyone else would have wilted under the pressure of the job, but not Saara. As always, acquitted herself with distinction.

She would go on to serve as Minister of Finance for 12 illustrious years (2003 to March 2015). During that period, she implemented a plethora of ground-breaking initiatives that included budget reforms, specifically introduced to improve the targeting of resources to the most important national priorities and to improve public resources management. As a result of these reforms, Namibia recorded its first budget surplus for three consecutive years (2005-2008). This enabled the country to support the economy during the global economic crisis in 2008.

During that same period, the Ministry of Finance introduced policy reforms that sought to increase access to financial services for more of our communities, to reduce cost of financial services for the low income, to provide funding for acquisition of homes in unproclaimed areas and to reduce the export of our savings so that it is invested in the country, in order to promote financing of local investment and thus support local economic growth and job creation.

Devoted to the promotion of local businesses and the growth of the local economy, the Minister Saara introduced the public procurement system to source local products and to reserve tenders for local enterprises, SMEs, women and youth enterprises to optimize support to the local economy.

Owing to the resulting robust performance of the economy under her leadership, the country secured an investment grading from Fitch Rating Agency and Moody’s, inspiring investors’ confidence in the Namibian economy and reducing costs of public borrowing.

After 12 years of exemplary performance as Minister of Finance, President, Dr Hage Geingob, appointed Saara as Prime Minister in 2015, making her the first woman in the history of Namibia to hold that office. Even for someone whose political career has consistently been on an upward trajectory, this was a monumental elevation in every sense; a resounding vote of confidence from the President, and no doubt, the leadership of the Party, attesting to Saara’s incredible ability to perform at the highest level. This appointment more than just elevated her politically; it provided an indication of her standing in the party and, most of all, an insight into her political future.

As Prime Minister, she is to provide administrative oversight, coordinate and lead a number of government programmes and, more broadly, ensure delivery at every level of the administrative machinery of the government.  Once again, the prolific Saara has acquitted herself true to form. In the seven years she has held the reins, she has recorded some remarkable achievements including, but not limited to; successfully overseeing the progressive implementation of the land conference resolutions, ensuring gender parity at all levels of public service and making significant gains at management level, driving the formulation of the Economic Empowerment Bill under which the government seeks to address inequities in the ownership of the economy, coordinating the Performance Management System that has ensured improved performance and transparency and accountability in the public sector, formulation of the National Food and Nutrition Security Policy to promote food security and combat malnutrition and leading the National Coordinating Committee on COVID, which enabled the government to avert the disaster caused by the pandemic through the implementation of an integrated program to deal with COVID in its different aspects-providing treatment and vaccinations, upgrading public health systems, providing financial assistance to help citizens cope with the social and economic impact of COVID and support to the economy to recover from the COVID-induced recession.

Globally, Saara has since earned her spurs. Her industry and proficiency have over the years placed her in good stead in the global arena. Saara has served with distinction in various regional and international bodies, representing our country, as Governor or Council Member, such as, the IMF/World Bank, African Development Bank, African Export-Import Bank, SADC and SACU. Her diligent service to these institutions has only served to bolster her international credentials and enhance her reputation both at home and abroad.

The foregoing certainly makes for impressive reading, but juxtaposed with her enormous home turf (Africa) advantage, the abounding opportunities at her disposal to create endless possibilities for Namibia in the Continent, all of that pales into insignificance. From an African continent perspective, she wields an advantage that few in Namibia’s political landscape can boast. Her historical connection with countries such as Sierra Leone, where she spent five years studying and is still connected to, represents a distinct advantage that she is intent on leveraging to establish multilateral relations with the West African sub-region in entirety, which could result in, among others, immense economic benefits for Namibia and her partners.

Her outstanding performances down the years, both in the service of her nation and the world, have not gone unnoticed. Saara has received her fair share of awards in recognition of her contribution to society. She is the recipient of several awards including Most Brilliant Order of the Sun (by HE Dr Hifikepunye Pohamba) in 2014, Honorary Doctorate in public Finance by the University of Namibia in 2015 and Honorary Doctorate in Law by Lincoln University, USA, in 2016.