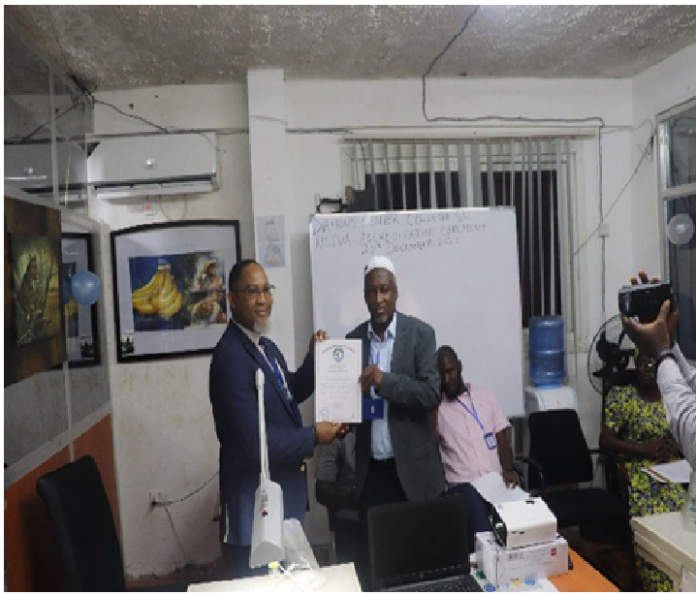 The National Council for Technical, Vocational and Other Academic Awards (NCTVA) has accredited the Diamond Centre College. The event took place at the college’s Percival Street edifice in Freetown.

Making a welcome statement and giving an overview of the college, Founder and Proprietor, David Chris Nze said that the establishment of the college has been a long journey, making reference to formative days at a time when late President Ahmed Tejan Kabba was Sierra Leone’s first gentleman. He said that such an history has been one of greater success and that same is admirable. He described the event as a long walk to freedom, but stated that same was worthy. He added that successive governments have similarly motivated him over the years, noting that President Dr. Julius Maada Bio is no exception. He said that the college is one that aims to create a greater difference and to act as a force to reckon with in the mining and diamond businesses.

Chairman, Sierra Leone Diamonds and Gold Brokers’ Association, Bashiru Kabba stated that the college came at the right time and that it will further provide a safer atmosphere for students and staff to coherently evaluate diamonds and related other minerals. He assured that the college will be doing well especially in the areas of training.

Public Relations Officer of the Sierra Leone Diamonds and Gold Brokers’ Association, Hassan Jabbi thanked NCTVA for the accreditation and assured that they now have a responsibility to soberly market the college. He said that it is prudent for Sierra Leoneans and other nationals to make a judicious usage of the existence of the campus.

NCTVA’s Personal Assistant to the Director, Madam Adama Bannister gave an overview of the accreditation process where she stated that the campus was able to meet all essential requirements. She informed that a peer review team was sent to the college after they had put together all documentation and the application. She said that they further organized a workshop which was well attended and organized and thus informed the accreditation and certification package. Marray S. Kamara from NCTVA administered the Oath of Accreditation.

The presentation of the accreditation certificate was done by the Director of NCTVA, Ing. Mohamed A. Jalloh, who had to step in for the Board Chairman, Professor Karim. Ing. M.A Jalloh admonished the management and leadership of the college to always work in line with the set standards and procedures of NCTVA. He further appreciated the laudable strides taken by the college to match 21st century education standards.

The Diamond Centre College, Sierra Leone, among other things seeks to be a leading institution in the areas of mining and minerals.