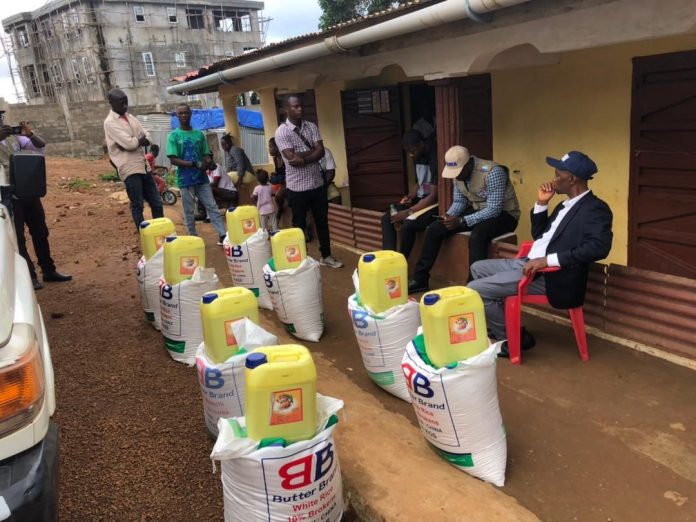 It could be recalled that the NDMA visited various flood locations on the 11th to assess the severity of the damage caused by the floods. During the assessment, at Hill Top – Southridge Community, Hill Station, it was revealed that the collapse of a 12 feet retaining wall on four (4) poorly constructed makeshift houses beneath resulted in the death of two (2) women and injured seven (7) other people.

During the visit of the assessment team, led by the Director of General of NDMA, Lit. Gen. (Rtd) Brima Sesay, who promised the victims that NDMA will not only respond but will solicit support from other partners on behalf of the victims to ameliorate their suffering.

As mandated by law to manage all disasters and similar emergencies within Sierra Leone, the NDMA through its Directorate of Relief and Response today provided food items which comprised eight (8) bags of rice and eight (8) gallons of 20ltrs vegetable cooking oil to each of the eight (8) affected households in order to cushion their food constrains at the moment.

According to Gerald King, NDMA’s Regional Coordinator for Western Area, the relief items are part of government’s immediate efforts to support the affected victims as they continue to assess the impact and coordinate for more support.

Whilst receiving his food items, Sullay Dumbuya expressed his thanks and appreciation to NDMA for their full contribution and support.  “I want to thank God and NDMA. They helped us with medical assistant couple of days ago and have helped us today with food items” he added.