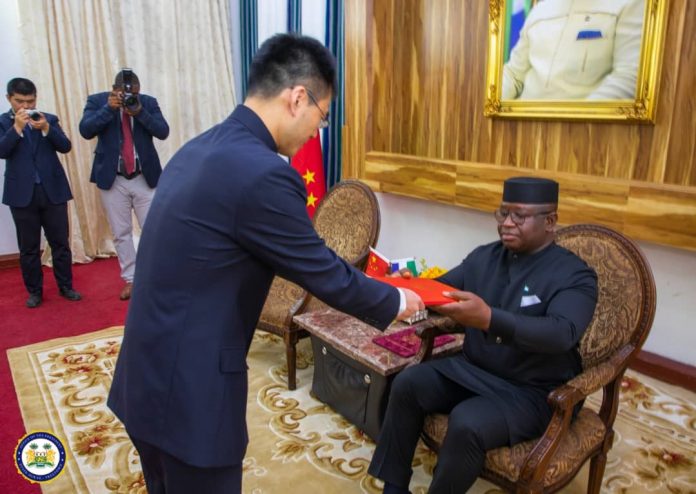 Ambassador of the People’s Republic of China to Sierra Leone, His Excellency Wang Qing has assured Sierra Leone of a ‘Win-Win’ – healthier and stronger bilateral relationship. He made this assurance while presenting his Letter of Credence to His Excellency President Dr Julius Maada Bio at State House in Freetown.

Ambassador Qing, while presenting his letter of honour says, “His Excellency, President Julius Maada Bio, I bring you greetings from your brother, President Xi Jinping, and the people of the people’s Republic of China.”

“I am here to present my letter of honour to you after President Xi Jinping has appointed me as Ambassador to Sierra Leone to take over from my predecessor.”

While receiving the ambassador, President Julius Maada Bio welcomed and thanked the incoming ambassador to Sierra Leone on behalf of the government and the people of the country.

He compared the two countries’ relationship to that of two best friends, noting that his government is working to keep them together.

President Bio said, “We are very grateful for the quality of the relationship between the two nations. As a nation, we appreciate the trusted and reliable friendship from China with so many positive gains. “As a nation, we deeply appreciate our friendship with China, based on our mutual understanding.”

“Over the past years, we have been supporting each other and will continue in that vein toward ensuring we continue maintaining, deepening, and widening the relationship between our two nations,” the president reiterates.

A toast was proposed for the healthy relationship between China and Sierra Leone.