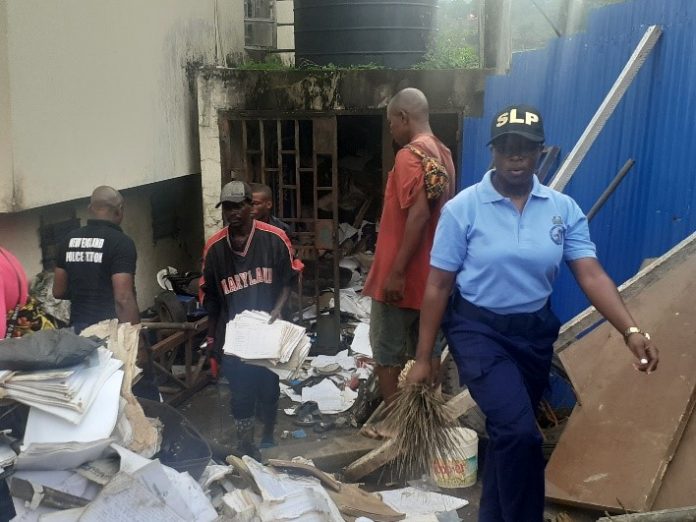 Due to her foresight as leader, Superintendent of Police Monica Johnson commonly known as Monique de Unique has led other officers attached to the New England Ville Police Station into massive cleaning in and out of the station.

The exercise took place over the weekend as a means of ensuring healthy environment for officers and clients.

The cleaning exercise which has been described as first of its kind was the first task of ASP Monica Johnson since she was appointed to head the New England Police Station as Officer Commanding OC of the post few weeks ago.

Superintendent of Police Monica Johnson said when she took up office as a leader with vision and foresight she noticed some of the challenges in her new posting and one of the biggest was cleanliness.

She went on to say she engaged heads of units in a family talk and the idea of cleaning the station came.

Superintendent of Police Monica Johnson pointed out that if the environment they are working is not healthy that means they too are not health and that of their clients.

“There are lots of big government ministries around New England Ville and we are the one that should give them protection and if you couldn’t protect ourselves how can we protect them.”

The pilled of garages in and out of the building looked like a dumping ground for both officers and nearby residents and offices despite the claim of some officers that they used to do general cleaning.

“I was told they were doing general cleaning but the one I came with is one with a difference. I will ensure that cleaning in the station is paramount every day.”

She further stated that when women take up leadership there must be a different as their role is to do thing in the best of their ability.

“I felt good in doing this and I also felt that I have achieved one of my goals.”

She called on other Police Stations to copy her good example.

“We should not wait until we get command from Headquarters before we can act. I am encouraging every woman in the SLP in top positions to show such discipline for visitors to know that people are in a particularly place.”

In terms of crime, Superintendent of Police Monica Johnson said as they are cleaning so they will clean up crimes in the community.

Line Manager FSU New England Inspector Audrey Rita Kamara, said team work has brought success for them to undertake such exercise. She also called on other station to double their effort by ensuring that their environment is healthy all time.

Police Officers were so excited about the cleaning as they were seen singing and dancing while cleaning offices, backyard and drainages.

This progress didn’t just happen overnight, though. It took years of smaller breakthroughs brought on by determined female officers like Rtd. AIG Kadie Fakondo, AIG Betty Turay, AIG Gloria O. V. Tarawally, AIG Memuna Konteh-Jalloh and few others in the face of a world that thought of women as nothing more than caretakers and housewives.

Monica Johnson is among few of the female Police officers who have broken the status quo and have upheld the adage that what men can do, women can do even better. This quintessential Police officer is a holder of a Master’s degree from the University of Bradford, United Kingdom and have worked as a Detective, and one of the best in that field.

She has been in the administrative field over the years and has also served as operations-minor-officer at Central Police division where she helped to restore sanity and confidence between the Police and the community.

She also initiated a system to inspire officers at the Central Police division, wherein hardworking police officers were awarded for their hard work and dedication. She has served as lecturer at the Sierra Leone Peacekeeping and Law Enforcement Academy (SILEA) where she influenced and capacitated so many senior and junior Police officers through her capacity building/development lectures. It is no secret that Integrity, passion for her job and professional ethics has always been her pedigree. Before her recent promotion as OC New England Police, she was Support Officer of the Lumley Division.

Today, her hard work and dedication has been recognized by the highest cadre of the Police force in the country.