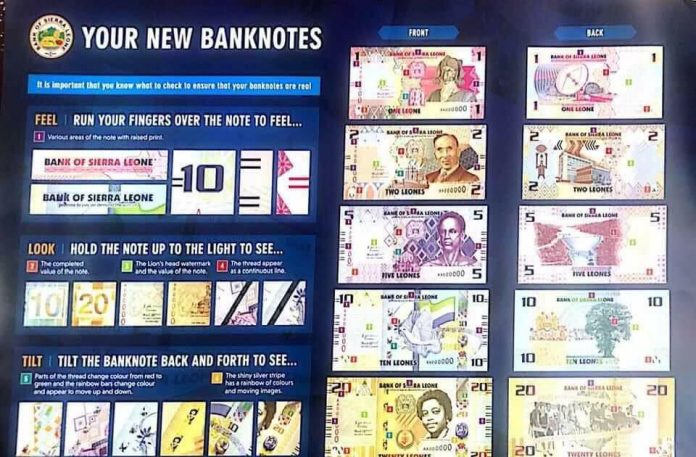 The Deputy Bank Governor, Dr. Ibrahim Stevens, has called for divine intervention to ensure that they succeed in the rollout of Sierra Leone’s new currency, the New Leone.

Dr. Stevens was speaking at Bank of Sierra Leone Sam Bangura Building during an Interreligious Council prayer session and declaration of a week of prayer for the new currency.

“We are a religious country and we believe in God so we are praying for God’s intervention to be able to deliver on this project,” he said.

On 11th August 2021, the Bank Governor, Professor Kelfala Morana Kallon, officially announced that a new family of currency notes and coins which shall be called the New Leone will become the legal tender of the country.

Professor Kallon believed that the re-denomination of the Leone will address the issue of hoarding, reduce the volume of currency around, cause a psychological change on the value of the Leone and boost investors confidence.

Despite several reservations and fear from some sections of the public, the Bank Governor assured that the introduction of the New Leone is one of the macro-economic policies that will form part of addressing the country’s economic situation, especially in terms of appreciation of the Leone.

“This was one of the things I discussed with President Bio before taking the job; it is something I believe will work as other countries have done it and achieve the desired results,” he said in one of his public engagements.

Religious leaders including President of the Inter-Religious Council, Archbishop Bishop Edward Tamba Charles, and Shiekh Abu Bakarr Conteh offered prayers for the new currency and the weeklong session will end today when it comes into use.

As the new notes comes into effect, there is growing apprehension and fear among citizens, including politicians. Members of the main opposition All People’s Congress (APC) moved a motion for the annulment of the statutory document that was laid in Parliament for the re-denomination of the Leone. They abstained from voting claiming that the process was un-procedural.

According to him, the problem is not re-denomination but how it is implemented. If implemented properly by introducing further counter inflationary and monetary policies, he said re-denomination will lead to a new exchange rate which will create creditworthiness in the economy and make Sierra Leone looks stronger in international capital markets.

Dr. Lakkoh argued that such strategy will also attempt to address inflation which might in turn resolve balance of trade, budget deficit and public debt maintenance costs.

“There is no outright answer to an economic crisis in the short term and any measure taken by any government to make adjustment will have its short term implications,” he noted.

Tax Expert and Founder of Betts Firm, who once served at senior management level at the National Revenue Authority, Alfred Akibo-Betts, said on Twitter that the value of the Leone has dropped by 40 percent due to the decision to re-denominate.

“We are experiencing the effects of that decision to redenominate our currency. The Leone value has dropped by 40% since the Bank Governor made the announcement, meaning that you have way less money if your salary hasn’t increase. It effect– fuel and commodity price increase,” Alfred tweeted.

As the rollout of the New Leone starts today, July 1st 2022, the Deputy Bank Governor is not only relying on prayers but says they are ready.

He said the machinery is all in place to ensure a smooth transition to the new national currency but cautioned that there is nothing that is totally perfect.

“We have put the machinery in place. All the committees have done their work to great satisfaction. We have done everything humanly possible…In short, we are ready to rollout the new Leone!” he said.

According to Wikipedia, the Leone was introduced on 4 August 1964, replacing the British West African pound at a rate of 1 pound = 2 Leones. When it was introduced, one Leone was worth precisely half a pound sterling or US$1.40. The Leone was worth more than the U.S. dollar until the 1980s, when the currency started to devalue rapidly. Years of high inflation have caused the value of the Leone to plummet, and a U.S. dollar became worth thousands of Leones starting in the 2000s.