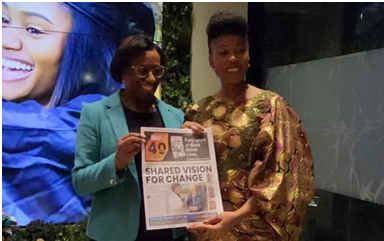 Leading women’s groups in Sierra Leone, including the Women’s Forum Network, Women in the Media Sierra Leone and the Julius Maada Bio Women’s Wing have joined other women across the world to congratulate the First Lady of Sierra Leone, Dr Fatima Maada Bio on her groundbreaking work at the United Nations General Assembly last week.

See page 7 of this newspaper for congratulatory messages to her excellency from women’s groups in Sierra Leone.

In similar development, Dr. Fatima Maada Bio has been featured exclusively in Britain’s leading Black Newspaper, The Voice, in their 40th Anniversary edition that was specially edited by His Majesty King Charles of Great Britain.

Autographed complimentary copies of the Special Edition were on Thursday November 10th 2022, handed over to the First Lady during a community celebration of the successes of H.E. Fatima Maada Bio by Black Women from the Carribean at the prestigious Jamaica National (JN) Bank premises in London.

Handing over the autographed copies to H.E. Bio, the convener of the evening’s celebrations, Madam Paulette Simpson CBE who is the Deputy CEO of JN Bank and one of the distinguished Executive Directors of The Voice Newspaper, told the gathering of influential Women from various parts of World that “Her Excellency Fatima is First Lady of Sierra Leone indeed but by her remarkable activities and the ties that bind us, she is First Lady of all of us Carribean Black Women”.

Paulette Simpson CBE said they were celebrating the successful life of Fatima from arriving in the UK as a refugee to becoming First Lady and now emerging as a powerful voice for the protection of Women and Children, especially Girls.

First Lady Fatima Maada Bio in her response first expressed of how thankful she was to be blessed with H.E. President Dr. Julius Maada Bio as her husband. She said her husband was the wind beneath her wings, her greatest supporter and her best friend who gave her the confidence to tackle issues on the global stage.

First Lady Fatima Maada Bio then spoke of how grateful she was to King Charles and the British Royal Family for the role they played in her life when she first arrived in London as a refugee. She expressed her appreciation and happiness that the King introduced her to The Voice newspaper because King Charles is very proud of her achievements following the financial support she first received as a refugee in 1996 from the Charity of King Charles who was by then the Prince of Wales.

The opening paragraphs of the publication on H.E. Fatima Maada Bio says thus:

“When the editor of The Voice approached me to interview the First Lady of Sierra Leone, Fatima Maada Bio, for this special edition edited by HRH Prince Charles, I was apprehensive… However, after a little research, I realised what an amazing person Fatima Maada Bio is – a former refugee, a victim of child marriage at the age of 12, an award-winning actress and a Pan-Africanist fighting for women’s rights.”

The full article prominently located on Page 10 of the 64-pages edition, can be downloaded from the link below

The 40th Anniversary newspaper edition was edited and due to be released in September but was delayed due to the passing of Her Majesty Queen Elizabeth. It has now been published and is available for sale on the streets of London and all over the United Kingdom and beyond.

Speaking about his decision to personally edit the publication, Charles wrote thus:

“Over the last four decades, with all the enormous changes that they have witnessed, Britain’s only surviving black newspaper has become an institution and a crucial part of the fabric of our society. This is why I was so touched to be invited to edit this special edition.”

Meanwhile, the celebrations of the iconic, globally distinguished First Lady of Sierra Leone is expected to continue and this Office will diligently report on all such celebrations.