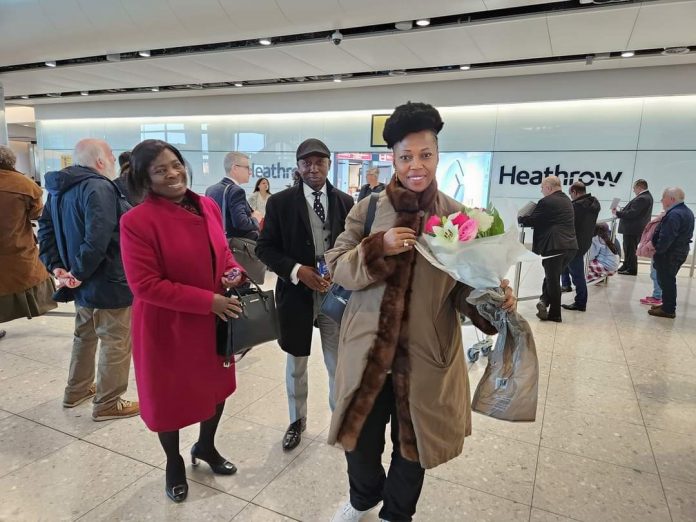 First Lady of Sierra Leone Her Excellency Dr. Fatima Maada Bio in the early hours yesterday November 28, 2022 arrived in London on a Special Invitation to Buckingham Palace from Her Majesty The Queen Consort Camilla.

The Sierra Leone First Lady, who is globally recognised for her work on protection of Women and Girls, has been invited to join the British Queen Consort at Buckingham Palace in marking the ‘UNITE to End Violence against Women’ campaign.

The ‘UNITE to End Violence against Women’ campaign is an initiative of the UN-supported “16 Days of Activism against Gender-Based Violence”.

The 16-Days activism is an annual campaign that begins on 25th November, the International Day for the Elimination of Violence against Women, and runs through to the International Human Rights Day on 10 December.

As part of such activism, Her Majesty Queen Consort Camilla will host Her Excellency Dr. Fatima Maada Bio and other distinguished global personalities at Buckingham Palace to discuss these issues.

First Lady Dr. Fatima Maada Bio is expected back in Sierra Leone this week at the end of her laudable engagements here in London.

As always, the Office of the First Lady will keep the public informed of her activities whilst she is here in London.