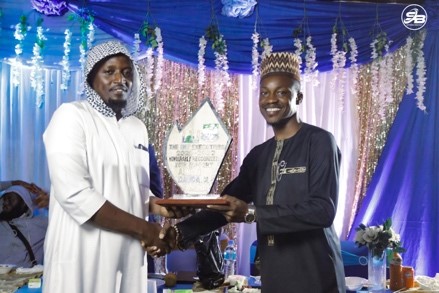 The IPAM Muslim Jamaat (IMJ) has awarded Alhaji Dauda M. Bangura prestigious award to recognize him for his outstanding contribution towards the promotion of Islam at the Institute of Public Management and Administration (IPAM) at Tower Hill in Freetown.

The award which was presented to him in the late hours of Sunday 11th September, 2022 during the fund IPAM Muslim Jamaat Fund Raising Dinner and Award s ceremony attracted a galaxy of prominent personalities, young Muslims from IPAM and from across other universities and members of the general public.

Receiving the award, former IMC Commissioner Alhaji Dauda Musa Bangura who doubles as Lecturer, IPAM and CEO of The Owl Newspaper thanked the organizers of the award for the confidence and respect they reposed in him and for considering him for such a prestigious Islamic award. He told his audience that there is no better award and promised to continue supporting the Muslim Jamaat at the university.

Alhaji Dauda Bangura was also given the opportunity to officially launch the IPAM Charity Wallet Fund which is established to assist students in dire need within the institution.

Launching the fund, he called on Muslim organizations and other support groups and individuals to give handsomely towards this fund as this will promote students’ welfare in every aspect and that by giving towards this venture, they will receive the blessings of Allah.

The CEO of The Owl provided the first undisclosed seed money for the Trust.

The Guest Speaker at the event, Sheik Hilal Amin Turay, a young religious leader called on the IPAM Muslim Jamaat to continue to embrace Islam and to promote the Islamic doctrine within their institution. He further spoke about alms -giving, noting that no matter how small or big, one does not need to be rich to give Zakaat. He admonished them to always pray for the success of the university and to also pray for the heads of the institution.

Statements were made by the President of the IPAM Muslim Jamaat, Ishaka Sheriff and others. The former encouraged students to continue to be members of the Jamaat as there are lots of rewards for that.

The dinner and award ceremony which was chaired by Alusine Tejan Kamara was climaxed with Quranic recitation and presentation of awards.