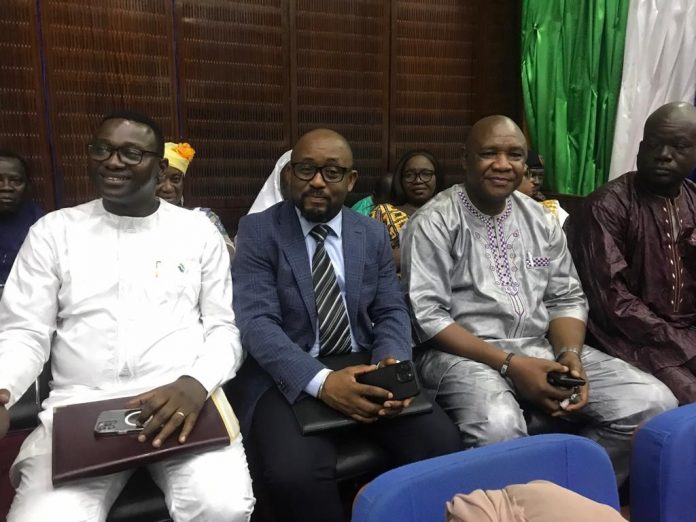 The Parliament of Sierra Leone, has on Friday, 13th January, 2023 approved Sheku Ahmed Fantamadi Bangura as Minister of Finance during the debate and approval of the Eight Report of The Committee on Appointments and Public Service, chaired by the Leader of Government Business, Hon. Mathew Sahr Nyuma.

Presenting the Presidential Nominees, the Leader of Government Business, Hon. Mathew Sahr Nyuma, stated that the nominees were interviewed on Thursday, 12th January 2023, in Committee Room One, Parliament Building in Freetown.

According to the Leader, the nominees were interviewed based on specified criteria and procedures, not excluding the strict consistency on their educational background, track records, tax obligation, and vision for a nationally productive tenure amongst others.

Seconding the motion, Deputy Leader of Government Business, Hon. Bashiru Silikie, explained that President Julius Maada Bio has done his constitutional mandate in nominating people to promote his agenda and Parliament had also scrutinized and approved them.

In light of patriotic admonition, he recalled and explained how the lethargic attitude of some approved nominees could cause attrition rate among Members of Parliament and also unseat government: “If these appointees perform, we would come back and if they fail, we would not come back”, he noted.

He expressed hope that the nominees would deliver in the interest of the State, while speaking well of the youthful Director General of SLRA, in light of the confidence bestowed on him by President Bio.

“I hope he would perform, because if he succeeds, more young people would gain jobs”, he noted, calling on the nominee to fix many deplorable roads, as he gave some advice to Ing. Tarlowoh.

An independent MP from Kailahun, Hon. Lolloh Tongi, described them as fine nominees with the requisite qualifications. While heaping praises on some of the nominees, on behalf of her constituents, she profusely thanked the government and ended off in commending the minister of finance.

The President of the Female Caucus, Hon. Veronica Kadie Sesay, expressed her trust and confidence in the nominees and stated that the President did not make any mistake in appointing the nominees. She encouraged them to go and deliver.

Hon. Ibrahim Tawa Conteh also thanked Ing. Momodu, and recalled his generous relationship and friendship with him. He informed the House that the Minister of Finance is the first ever appointee from Kambia district. He encouraged him to continue to perform in light of economic transformation.

Hon. Neneh Lebbie congratulated the nominees and categorically informed them that there is no space for failure. She noted that President Bio wanted to achieve his manifesto and that is the more reason they are replacing others.

Hon. Hindolo Ngevao expressed happiness over the appointment, in the light of youthfulness, nationalism, and merits. He recalled the previous appointment and promotion of the minister of finance and admonished him to work hard, in order to address the inflation and global challenges as well as limited cash flow and promote agricultural production.

The Chairman of the Finance Committee in Parliament, Hon. Francis Amara Kai Samba, narrated that the nominees are qualified, and in order for peace to be achieved, he admonished one of the nominees, Mr. Kpakra, to embrace and embark on peace and national cohesion.

Leader of C4C, Hon. Emerson Saa Lamina, exponentially stated that the nomination is a testament to the fact that Sierra Leone has gotten no shortage of good people. He recalled the good work of Parliament and their devotion and commitment in approving budgets and other related works.

The Acting Leader of NGC, Hon. Foday Marion Kamara, recalled his statement of endorsing the sacking of some state officers and that his prediction has come to pass. He also insisted on the changing of some financial policies for better economic transformation. He asked his colleagues to approve the minister of finance and advised the latter to improve the economy in order to reflect on the welfare of the people.

Acting Leader of the Opposition, Hon. Amadu Kanu, thanked all who had earlier spoken to the debate. He recalled the scrutiny of the nominees and informed the House on how the nominees were properly interviewed and also told colleague MPs that they are adequately and suitably qualified for their various positions.

He called on the House to approve them. He used the opportunity to advise the nominees and called on them to work well, particularly now that the country is approaching elections.

“You nominees should live up to the expectations of the President” he stated.

Leader of Government Business, Hon. Mathew Nyuma, expressed thanks and appreciation to all those who contributed to the debate.

He advised the minister of finance to improve on policies that would improve the economy. He spoke about the good reception of the minister and compared the good policies of other countries, in light of transformation of economies.

Rt. Hon. Speaker, Dr. Abass Chernor Bundu, advised the nominees to work in the interest of the State and also encouraged them to work in tandem with President Bio’s developmental agenda.

“Nothing succeeds in life like success itself” he stated.  The Speaker congratulated the nominees on behalf of Parliament. He admonished and wished them well in their new offices.