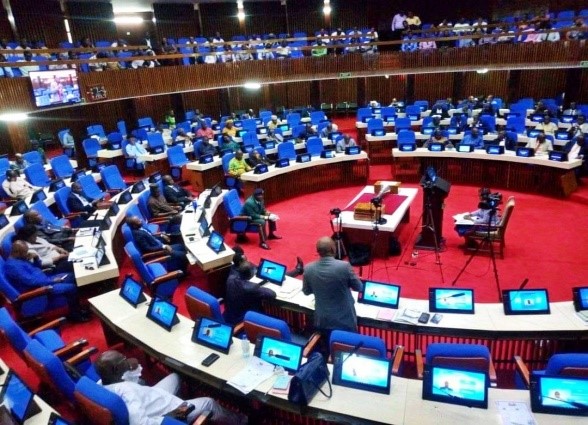 Parliament of Sierra Leone has on Tuesday, 21st June, 2022 commenced debate on the proposed Public Elections Act 2022. The Bill was laid to Parliament by the Attorney General and Minister of Justice, Mohammed Lamin Tarawally.

The Bill, entitled Public Elections Act 2022 seeks to bring a number of changes to the existing 2012 Public Elections Act. All of the members of Parliament present yesterday at the Well recognized the critical nature of the Bill and call for public (TV) debate on the Bill and, the Speaker, Hon. Sengeh Poh Thomas emphasized that, citizens be feel free to submit their own inputs on the Bill through the Clerk of Parliament.

The 2022 Public Elections Act is seeking to capture critical and important areas that have to do with the administration and conduct of the country’s elections. Among many others, the 2022 Public Elections Act is seeking to adopt the following: “To propose for a naturalized citizen of Sierra Leone (dual citizen) to be eligible to contest Parliamentary but not presidential election.” This particular clause in the Bill receives widespread rejection from almost all the MPs that spoke on Tuesday. They highlighted several reasons as to why dual citizens should not be eligible to contest for Members of Parliament. The Bill also called for a permanent date for general elections to be held “Presidential election conducted after 2023 shall be conducted on the first Saturday of November after the expiration of the term of the sitting President,” the Bill stated. MPs supported this aspect of the Bill and also called for a fix date for inauguration of elected President.

What stands and seems to be prominent to Sierra Leoneans is the Proportional Representation that would go along in the Public Elections Act of 2022. The Proportional Representation seeks to dissolve constituencies and adopt District Block System. This will give political parties more power to determine their representatives in Parliament. The Public Elections Act 2022 captures a lot of other changes that seeks to reform the country’s electoral laws and system.