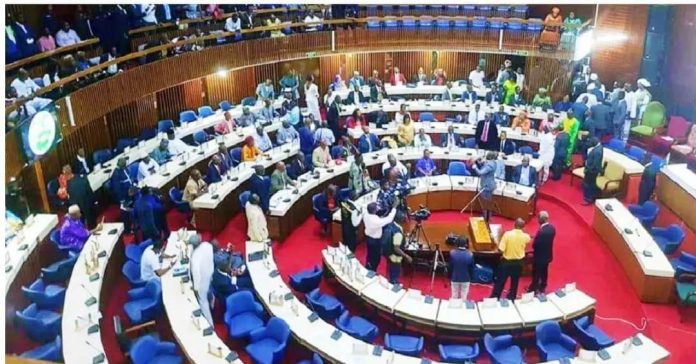 The bill entitled The Courts (Amendment) Act 2023 was passed into law by the Parliament of Sierra Leone.

The bill seeks to amend The Courts Act of 1965, in order to increase the jurisdiction of The Magistrate Court in Civil matters and to provide for other related matters.

In presenting the agreement to Parliament, the Attorney General and Minister of Justice, Mohamed Lamin Tarawallie said that the bill is necessary and timely, in increasing and expanding the jurisdiction of the court system, so as to provide speedy trials in The Magistrate Court and also to ease the burden of citizens, when it comes to accessing justice.

In making his submission, Hon. Dr. Mark Mahmoud Kalokoh referred to the bill before the House as sensitive but non-controversial. He spoke about the challenges of the court, in relation to the delays in court matters and the huge piles of cases in front of the Magistrate Court.

He opined that, the amendment before the House would help in addressing matters of the Judiciary, especially petty issues.

On his part, the Chairman of the Legislative Committee in Parliament, Hon. Sulaiman Marry-Conteh, maintained that, the needful has to be done in this current time of transformation, so as to make things better for revamping the judiciary.

He supported the timeliness of the bill and urged colleague MPs to speedily enact the bill into law.

Independent MP from Pujehun District, Hon. Shaka Sama, explained that, the Judiciary needs more Judges and pinpointed the positive move of the justice system and commended the AG for restructuring the Judiciary.

He also noted that, many people who are in prison today have not been fairly treated and they have been left to perish in jail.

Hon. Sheku Munirru Turay commended the Minister for the transformation of the Judiciary and requested proper clarification on matters of procedures and other related juridical matters of the Court.

Rounding up the debate, Opposition Leader, Hon Chernor R.M. Bah, joined his colleagues in the passage of the bill and maintained the necessity and timeliness of the bill.

In concluding the debate, Leader of Government Business, Hon. Mathew Sahr Nyuma, commended the Minister and colleague MPs for their meaningful contributions to the bill, adding that, the bill will make a good law and underscored the transformation of the judiciary, “We have made a lot of progress in enacting good laws for the State,” he concluded.

In another development also, Parliament of Sierra Leone has on Thursday 12th January, 2023 debated and enacted into law the Bill entitled; “The National Unity and Reconciliation Commission (Repeal), Act 2023”.

The Bill seeks to repeal The National Unity and Reconciliation Commission Act, 1996 (Act No. 1 of 1996).

Both Leaders of the House as well as Members of Parliament spoke well on the passage of the bill.

Also, The Speaker of Parliament Hon. Dr. Abass Chernor Bundu has ordered the Chairpersons of both the Committees on Transport and Aviation and the Internal Affairs to summon relevant MDAs to address the matters of the lawlessness of bike riders in Freetown.