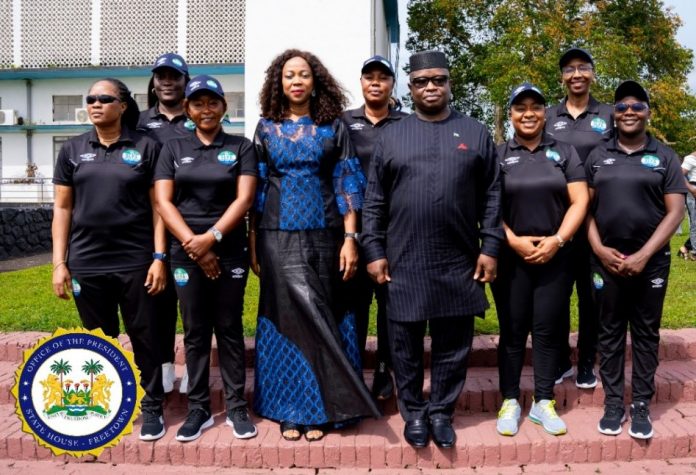 His Excellency President Dr Julius Maada Bio has admonished young players to pay attention to their education to help them succeed with their careers.

He was talking to Board Members and the different teams that constitute the Female Premier League at State House.

President of the Sierra Leone Football Association (SLFA), Thomas Daddy Brima, expressed gratitude to President Bio for his relentless efforts and support to ensure that the country had its first-ever female football league.

He went on to explain that seven months ago SLFA appointed seven women from diverse walks of life to run the maiden edition of the league and since their appointments, they had been working tirelessly to ensure that the competition was organised across the country.

“His Excellency, this is a way to create job opportunities for girls around the country and support youth development,” he said.

Board chairperson, Asmaa James, said she was very positive about their visit to the presidency and used the occasion to also thank First Lady Fatima Bio for being supportive since the board was constituted.

She further noted that all the 12 teams, that would be taking part in the competition, had been properly scrutinised as they went through a thorough panel of interviews to ensure that they had proper agreement contracts with the girls, adding that those were necessary criteria to ensure that the right things were being done.

She said because of the passion all the board members had for football they had been working tirelessly, including going across the country to ensure that the league became a success.

“Mr President, I am happy to say that this is the first time in the history of the country for such to happen. in total there are 12 teams of which 8 are from the provinces and 4 from the Western Area.

-Notwithstanding the financial challenges, for which we are calling on your good office to intervene, we already have plans in place to start the league on Saturday 15th October in Makeni, the northern part of the country,” she said.

Madam James also thanked board members, the teams and their managers for their commitment to ensuring that the league was played.

First Lady, Madam Fatima Bio, in her statement as a champion of the female football league, encouraged the girls to put in their best as they were lucky to have made history, noting that they should also endeavour to prioritise their education.

“To be a great footballer is one thing, but to also be a successful footballer is another thing,” she noted and used the opportunity to admonish the men to allow the girls to play freely without any harassment or intimidation.

While addressing the audience, President Bio said he was very happy to have received them at State House, adding that the process was a very important one because the platform had been created to give women and girls the space to express themselves freely.

He said in spite of the challenges they were facing, he wanted to assure them of his government’s commitment and support to ensure that the league was played successfully, adding that the country was experiencing a female premier league for the first time.

President Bio thanked the leadership of SLFA for supporting the board while also encouraging the board to take up the challenge and make the league a success.