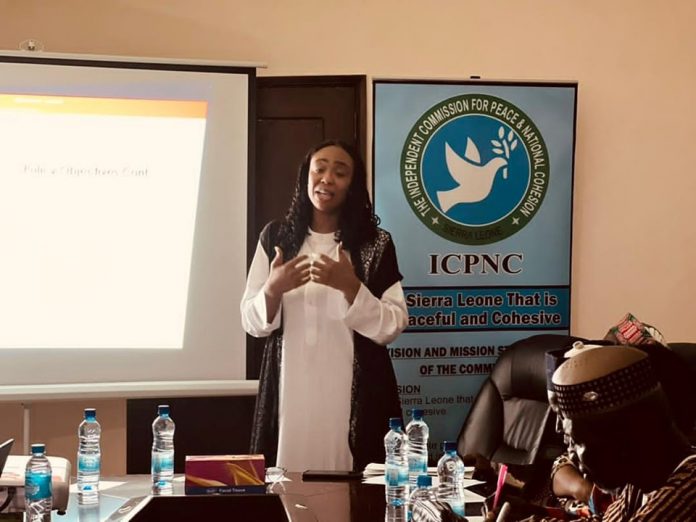 The Independent Commission for Peace and National Cohesion (ICPNC) has held one-day meeting with leaders and representatives of different Muslim organisations in Sierra Leone.

The meeting was held at the Peace Commission Conference Room on Lamina Sankoh Street in Freetown.

Declaring the purpose of the meeting, the Executive Secretary of the Independent Commission for Peace and National Cohesion, Hawa Sally Samai stated that it was a familiarisation meeting geared towards bringing together Muslim leaders of various organisations and officials of the Commission which in other words was introducing the Peace Commission to leaders stating that, there are some people who were not aware of the institution and some that have heard of its existence but do not know the work of the Commission.

She dilated on the formation of the Peace Commission, its mandate and activities they have undertaken so far, the August 10 violent protests and how the Commission intends to join force with all Muslim leaders on a nation-wide peace awareness sensitisation drive in the international peace month of September.

In her presentation, Madam Hawa Sally Samai, dilated on the antecedents that led to the establishment of made the Commission, its mandate, implementation of its mandate, the successes and challenges they have been facing since inception.

She explained that what they are desirous of achieving is a Sierra Leone that is peaceful and cohesive maintaining how the responsibility lies with them to facilitate peaceful co-existence, inclusiveness and to building a network for peace and national development.

“As representatives of different Muslim organization it is good that you work closely with the Commission to preach peace throughout the country knowing that the mosque serve as moral guarantors, as such will create huge impact in enhancing peaceful co-existence,” she appealed.

Madam Samai mentioned major thorny stalemates that they have mediated to ensure peace and stability in communities, adding that notwithstanding gains made it was not all issues they were able to amicably resolve or prevent from escalating citing the August 10 violent protests saying the Commission was not knowledgeable of the group or persons responsible for the violent protests in Freetown and parts of the provinces.

She called for a fair dialogue by all present through presentations of disaffections in order to find possible ways to maintain peace in the nation.

With regards the August 10 violent protests representatives of different Muslim organization present made references to various factors and also proffered possible solutions to certain societal ills. One thing that featured prominently was lack of communication on the part of the Government some expressing the view that the President and his Ministers must work effectively to counter false rumors.

Some maintained that the Government should completely eradicate or roll away the alcohol from the society, because that has been one of the main factors that causes the August 10 incident which resulted to lose of life’s.

It was ultimately agreed that as leaders they are ready and willing to work hand in hand with the Commission to preach peace among their congregation and denounce violent activities or words that could lead to violence.

In an interview with Abubakarr Koroma, a member of a Muslim communities, diluted on the August 10 incident stating that there are lots of factors that lead to protests, mentioning the late response to the cries of the people or mistrust of some institutions.