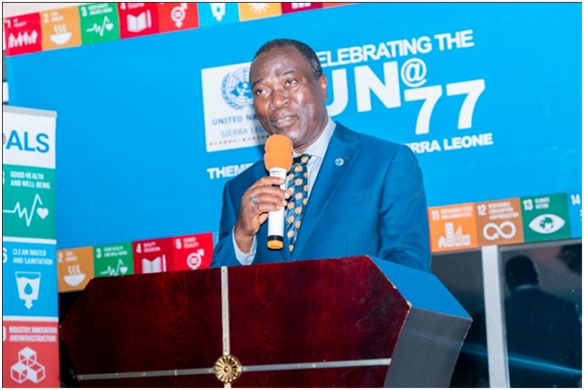 United Nations Resident Coordinator (RC), Babatunde Ahonsi, called for a commitment to maximising the potential for pooled knowledge and efficient use of resources to realise the Sierra Leone’s vision of becoming a middle-income country by 2035.

Speaking at an official engagement of the development partners in observance of the 77th anniversary of the United Nations, Mr Ahonsi emphasised the need to work together to support Sierra Leone “in the overriding goals of peace and unity that will make it (development) all possible”.

The RC asked for reflections on how the UN and the development partners can be agents of peace and unity. This, he said, can best be achieved “by supporting activities such as inclusive dialogue, building capacity for peaceful resolution of grievances and conflict, promoting transparency in government and freedom of the press, allowing for meaningful participation of women and youth in society, and providing building blocks for inclusive economic development.”

The RC also showed appreciation for the work of the Government of Sierra Leone, civil society, media, private sector, and other partners, who work steadfastly to advance the sustainable development goals (SDGs) in every part of the country, engaging community leaders, youth, women, farmers, entrepreneurs, health workers, teachers, and many others in building peaceful and cohesive communities.

“Government is guiding the economy to rebound from the impacts of the COVID-19 pandemic and to address challenges brought on by the Russia-Ukraine conflict,” Mr Ahonsi said while acknowledging the difficulty of these tasks. He reiterated the commitment of the UN system in Sierra Leone, to support the country to realize the Agenda for Sustainable Development and the Medium-Term National Development Plan (MTNDP) through the UN Sustainable Development Cooperation Framework.

Furthermore, he thanked the development partners for the variety of expertise and experience they bring to collaborations to advance rights and opportunities for all Sierra Leoneans.

The UN Day theme of ‘Peace and Unity’ was adopted to remind people of how important these two elements are to the development of the country and the opportunity available to further these goals through collective work.

“Now, more than ever, we need to bring to life the values and principles of the UN Charter in every corner of the world…. let us renew our hope and conviction in what humanity can achieve when we work as one, in global solidarity,” Mr Ahonsi quoted UN Secretary-General Antonio Guterres in observance of the day.

Deputy Dean of the Diplomatic Corp, His Excellency the High Commissioner of the Federal Republic of Nigeria, Henry John Omaku said the UN Day celebration is a reminder of the need for continued solidarity, collaboration, and cooperation to achieve the objective of the UN charter, “and more importantly, rescue the SDGs.”

He called for peace and unity to be promoted in Sierra Leone and globally.

In his remarks, Minister of Planning and Economic Development, Dr Francis Kai-Kai said the Government is firmly committed to the ideals and principles of the UN and will continue to support the organization as the global body through which the world comes together to confront current challenges.

“Sierra Leone is ready and willing to work with the UN in the area of development cooperation across the board and globally,” reiterated the Minister.

He congratulated the UN in Sierra Leone for emerging as the best 2021 UN Country Results Report for Africa. “… I share the feeling of pride as your success is our success. Let’s keep the good work and together strive to make Sierra Leone a best performer in monitoring the SDGS, especially through the platform we have created for this purpose,” Minister Kai-Kai said.

Foreign Affairs and International Cooperation Minister, Professor David Francis expressed appreciation to the UN System in Sierra Leone for its support towards the country’s implementation of the MTNDP and the progress towards the SDGs.

He said the Government was encouraged by the strong political will of President Julius Maada Bio, “to promote sustainable development and enhance inclusive governance, protect human rights including the fight against gender-based violence and the fight against corruption.”

Minister Francis assured that the Government is fully committed to conducting peaceful, free, and fair democratic elections in June next year.

Earlier on Monday, staff of the UN in Sierra Leone participated in a 5KM fun run and walk on Lumley Beach. Afterwards, they took part in a peace-themed t-shirt competition and an agency-mandate booth exhibition contest. IOM and UNFPA emerged as winners in the booth display contest, while UN Women and UNDP won the t-shirt competition. Lucretia Mbogba of UNICEF won the female category of the run and Foday Kabba of UNOPS emerged as the winner in the male category. Seven national staff who retired earlier in the year were also honoured with plaques of commendation.