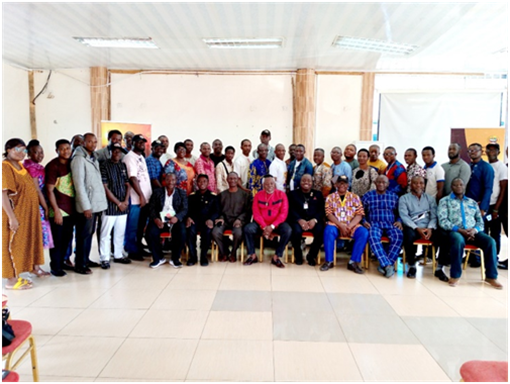 The Pentecostal Fellowship of Sierra Leone and the Body of Christ have strongly condemned the rising attacks on the church in Sierra Leone especially the unprovoked attacked on Glory Mission at Katinti Road Kambia 2.

A Press Release signed by the PFSL President, Bishop Akintayo Sam-Jolly and Vice President, Apostle Augustine S. Kamara indicated that PFSL received report on the night of Sunday 17th July 2022, that one of its Pentecostal churches in Kambia, The Glory Mission in Kambia No. 2, Katinti Road, was attacked by Muslims shouting Islamic chants whilst a joint youth quiz competition was in progress.

The released stated that the Muslims pelted the building with stones and destroyed their furniture in an unprovoked attack.

Some of the pastors rushed down to the local police station and spoke with the officer they met in charge. They asked for their immediate intervention to salvage what was left and avoid further deterioration of the situation.

The presence of a high government official, followed by robust response of the ONS, military, and the police, was life-saving. Some steps have also been taken to address the situation.

PFSL has brought this to the attention of the Minister of Internal affairs, Inspector General of the Sierra Leone Police, the General Secretary of the Interreligious Council of Sierra Leone, and other relevant authorities. Locally, the office of the ONS, the Police, Commanding Officer of the 11th Battalion of the RSLAF are among those who went to the scene.

A fact-finding team comprising members of the Fellowship from four of our chapters were dispatched to Kambia on Tuesday 19th July 2022 in order to properly acquaint themselves with the unfortunate incident.

A second visit was made on Thursday 21st July with both visits being led by the Public Relations officer of the Fellowship in the person of Apostle Siaka Kamara.

This incidence is the second report from Kambia that has reached PFSL within recent months with the first being on 13 April 2022 Easter Period, Night of Worship were glass windows were broken in another unprovoked attack on the Door Christian Fellowship.

No action was taken by the authorities against the perpetrators in the first attack except that the victimized Brethren were asked to forgive the assailants.

No repairs were done for the damage caused. rather the mosque was asked to call upon the victimized pastor to make adjustments whenever they the Muslims feel that they have been aggrieved by the Church – vice versa.

There have been a couple of other such attacks within the city of Freetown also. This includes an attack on The Word International Church on Nimbana Street in which there was damage done to their facilities with no compensation given.

That attack, (which was the second on that church), was reported to the Central Police Station and the church was rather advised to manage the situation.

There is also a matter of a Pastor being stopped to turn the sod on his own land by Muslims from a nearby mosque.

This also has been reported to the Police and subsequently to the inter-religious Council of Sierra Leone (IRCSL) since May and at this point no action has been taken to address the given situation.

In the earlier attack by the same mosque on the same church (about seven years ago), the youths threatened to burn down the church, frightened the young people and spoilt their program. We demand that such attacks must come to an end now.

“PFSL views this unprovoked attack not just on the church in Kambia but on the Body of Christ, and strongly condemns it. We will not tolerate these acts of Islamic activists and extremists in any shape or form. We will deal with it with all the level of resistance it deserves. Appropriate and lawful steps would be taken as we do meaningful engagement to curb this and forestall all such plans to cause religious unrest in our nation. Our constitutional religious freedom and human rights must not be violated,” says Bishop Akintayo Sam-Jolly, President of PFSL.

Earlier on in the year, reports were also made to the Sierra Leone Police and other relevant authorities regarding the interference of secret societies on church services and Christian activities in the provinces.

In all of these multiple incidences, there have never been any actions taken to give Christians their constitutional freedom of worship.

In the meantime, we ask our members to be law-abiding while taking necessary precautions to defend themselves if their lives and properties are endangered.

Please keep the brethren in your prayers. You will be further updated as we monitor and the sad development. We pray for healing for those who suffered from the stoning.