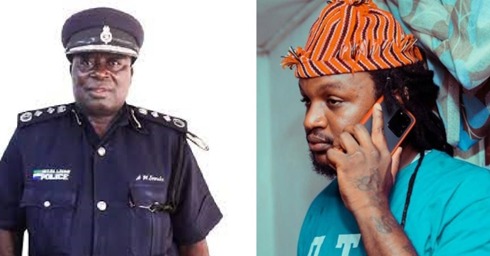 The Sierra Leone Police has confirmed that they have cut off the dreadlocks of Alhaji Amadu Bah aka LAJ while in detention awaiting investigations on alleged Robbery with Violence.
In a press statement issued by the Police over the weekend, the Force states that the holding centre custody facility where LAJ is currently kept operates a standard procedure predicated on preserving the health and well-being of all male suspects.
It states further that the procedure demands that all male suspects taken into that facility would have their hair shaved off their head, while in the custody of the holding centre.
LAJ, the police went on, who was and still in that custody facility, had his dreadlocks shaved off, as the procedure in that facility dictates; and also for security reasons.
These standard procedures, the police states, were clearly explained to LAJ before his hair was shaved and that he is still being held in custody awaiting legal advice on the preferment of appropriate criminal charges on his file.
The Police denied social and traditional media lashes that LAJ was injected with red chemical substance while in detention.
The Police say LAJ is under investigation for a felonious offence for which he could be kept in police custody, while investigations are ongoing, for a period spanning up to ten days.
It can be recalled that LAJ was taken into police custody on Sunday June 12, 2022, following a report made against him and some others by three fuel pump attendants, working for LEONCO Filling Station, which is situated along Main Motor road, Congo Cross.
Prior to the police release, Ishmail Bah the elder brother to LAJ said LAJ told him that he was forcefully restrained and injected with an unknown red liquid by police officers.
On another note, LAJ’s Lawyer, Madieu Sesay in an open letter to the Inspector General of the Sierra Leone Police, Ambrose Sovula drew the latter’s attention to what he termed as “grave constitutional violations regarding the arrest and unlawful detention of his client”.
He said it is his fervent belief that the gains that this country has reported in the international community regarding improvements in Sierra Leone with respect to the efficacy of the Rule of Law, due process and respect for Human Rights have been severely marred by certain members of the Sierra Leone Police who have consistently demonstrated no respect for law or judicial processes.
He said he was informed by his client that on Sunday 12th June 2022, while on his vehicle with others heading towards the east end of Freetown, a group of police officers accosted and arrested him, then took him to an unknown location without communicating to him the nature of the offence(s) for which he was arrested as provided for under Section 23 of the 1991 Constitution.
Lawyer Sesay went on that after several failed attempts on Tuesday 14th June 2022, his client’s brother and himself had a slender opportunity to see him when he was brought to the CID headquarters for a statement to be obtained from him.
He said he then observed a drastic change in his appearance – hair on his head had been completely and unconventionally shaved and that when his brother enquired from him as to the reason for the change in his looks, his client in the presence of some police officers, informed them that he had been taken to the OSD headquarters (a place called Benghazi) where over 7 police officers grabbed him and forcefully cut off his hair without his permission.
He said his client further shared with them that since Sunday, he had been kept in solitary confinement under inhuman conditions and without knowledge of the offence for which he was arrested or an opportunity to contact his relatives as his personal mobile phone was forcefully taken from him.
The lawyer further explained that his client also informed him that during the period he was at Benghazi, (between 12th and 14th June 2022) he was constantly tortured and subjected to inhumane and degrading treatment by different police officers in blatant violation of his fundamental Human Rights.
He said his client informed him that he was also deprived of food and was left to lie on the bare floor in an unsanitary location.
He said since Tuesday 14th June till date, he has not been able to see his client or know his whereabouts and that even though the police had promised that his client will be charged and arraigned in court the following day (Wednesday 15th June 2022), they have failed to do so.