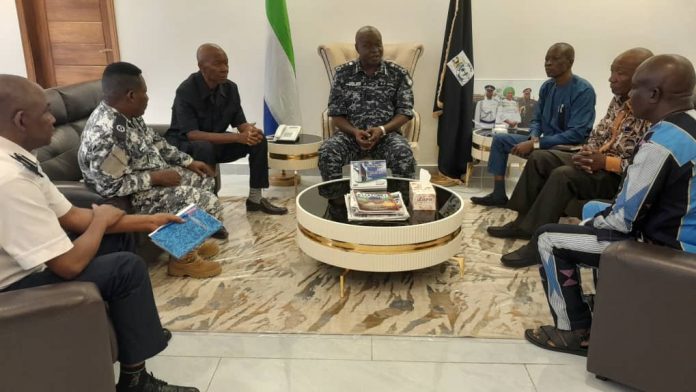 The Inspector General of Police (IGP), William Fayia Sellu has approved a request from the Pejeh West chiefdom in Kailahun district to construct a Police Station in Bunumbu, the Chiefdom Headquarter town.

Addressing the delegation, IGP Sellu explained that the SLP would like to render more support but they are cash trapped.

The Police IG said Bunumbu is a big community and it is strategically located in the chiefdom, which makes it more eligible to have a Police Station.

He said he is aware of the issues within the chiefdom for which the presence of more security personnel is paramount to grab some activities on the bud.

He however informed that the SLP needs a quick fix as the country approaches elections and urged for the provision of a temporal accommodation for personnel while the construction continues.

He pledges full support to the project assuring that sooner or later, he would do a site visitation.

Paramount Chief of Pejeh West chiefdom, Kailahun district, Dr Shamsu Mustapha said they have received funding for the rehabilitation of the Eastern Technical University, Bunumbu Branch but that since development and security are twin concepts, they as chiefdom stakeholders have allocated three acres of land to the SLP for the construction of a police station and barracks.

PC Dr. Mustapha went on to say that development comes with a lot of challenges, thus the Police Station will serve as a springboard to mitigate any future crime.

He assured that temporal accommodations will be available for personnel.