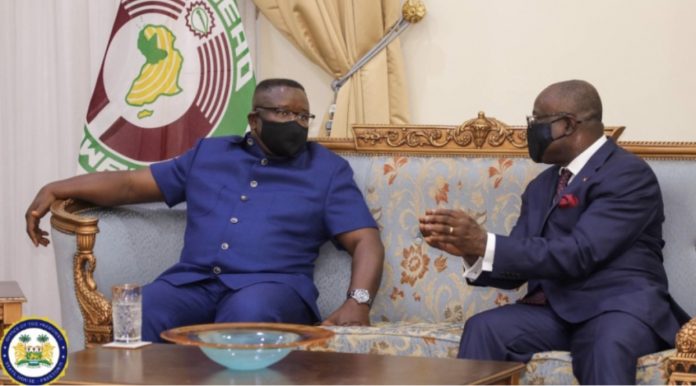 President Dr Julius Maada Bio has attended the Second Extraordinary Summit of the Authority of Economic Community of West Africa, ECOWAS, Heads of State and Government on the political situations in Burkina Faso, Mali and Guinea.

The Summit, which was held in Accra, Ghana, brought together Heads of State within the ECOWAS bloc, following the increased spate of coups in the sub-region.

Speaking during the opening ceremony, Chair of the Authority of ECOWAS Heads of States, Government and President of Ghana, H.E. Nana Addo Dankwa Akufo-Addo, stated that he was welcoming his colleagues with a heavy heart to Accra to discuss the political situations in Burkina Faso, Mali and Guinea.

He further noted that the presence of his colleagues was a strong indication of solidarity, adding that “the resumption of coups is a matter of great concern”.

The Heads of States and Governments had received reports on the mission of the ECOWAS Committee of Chiefs of Defence Staff and the Mission of the Ministerial delegation.

President of the ECOWAS Commission, Jean-Claude Kassi Brou, presented to the Authority two memoranda on the political situations in Mali and Guinea.

President Dr Julius Maada Bio departed Accra on Friday for Addis Ababa, Ethiopia, to attend the 35th Ordinary Session of the African Union Assembly of Heads of States and Governments scheduled for 5th and 6th February 2022.