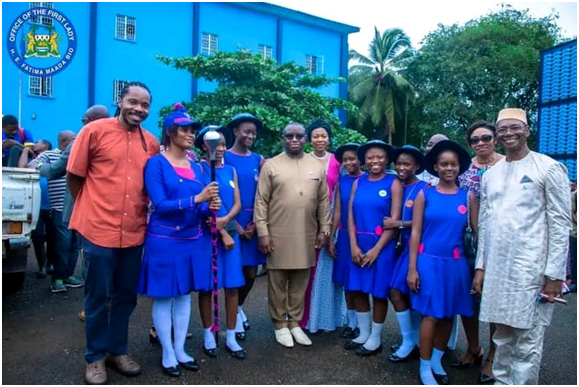 President Dr. Julius Maada Bio was accompanied by his wife, the First Lady Dr. Fatima Maada Bio over the weekend to commission a new classrooms block named the Florence Dillsworth Building at the St. Joseph Convent Secondary School in Freetown.

Minister of Technical and Higher Education, Prof. Alpha Tejan Wurie, described the event as special noting that it was a demonstration that a lot could be done for Sierra Leone by Sierra Leoneans.

He said the massive increase in tertiary education enrolment was inspired by the President’s investment in education.

First Lady, Dr. Fatima Maada Bio expressed gratitude to President Bio for providing the space and platform for women to be part of the development process in the country.

She thanked him for being selfless and for being a true father to the children of Sierra Leone, by providing free sanitary pads and the free quality education.

She went on to admonish the boys to allow the girls to live up to their full potentials to be educated and be free and safe in their environments. She also thanked donor partners for providing the sanitary pads for the girls.

Mrs. Bio said the current generation of girls will be the change we require as a nation, while appreciating the President for introducing the free quality education scheme.

In his statement, President Dr. Julius Maada Bio said he was truly pleased to join the Old Girls Association, teachers, partners, and fellow Sierra Leoneans to commission the edifice.

He described the occasion as an opportunity to reflect on gains made thus far and make firm commitments to the national development campaign.

The president further stated that public education on menstrual hygiene at schools and at the community levels is very important noting that the objective is to discourage misinformation and negative attitudes toward menstruation.

“We have lifted the ban on pregnant girls in school because we believe that every girl, poor, pregnant, rural, living with a disability has an inalienable right to learn and be all that she can be. Equally so, we have introduced comprehensive sexuality education in schools so that girls learn about and know their bodies as they should.