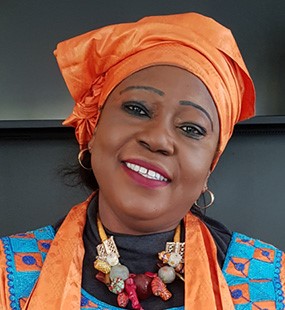 Interim President of the Republic of Guinea Col. Mamady Doumbouya visited Sierra Leone on Friday 28th Oct. 2022. According to the Guinea Head of State he came to the country on a return visit because President Bio was the first President who visited him last year when he assumed office. He said the visit was a demonstration that Sierra Leone and Guinea has a good and long-standing relationship.

Guinea Military President Col. Mamady Doumbouya travelled by road from Conakry with heavy artillery guarded convoy. He was first received by the Vice President of Sierra Leone Dr. Mohamed Juldeh Jalloh at the Kambia border where he joined Col. Doumbouya’s escort to the Radisson Blu Hotel in Freetown where the Minister of Foreign Affairs and International Cooperation Prof. David Francis also welcomed him. He later proceeded to State House and received by President Bio, the First Lady and other top government officials. The two heads of state had a close-door-meeting before Col. Doumbouya embarked on the journey to head back to Conakry.

The visit happened shortly after an ECOWAS delegation headed by the Speaker of ECOWAS Parliament Sidie Mohamed Tunis met with the Guinea Prime Minister and later Col. Mamady Doumbouya to discuss on the successful transition of power back to civilian rule. Against that backdrop, many were of the view that he came to learn from President Bio who was in that same position of a Military Leader during the NPRC days. However, no public official statement was made by the two Heads of State.

The Guinea Military Leader only granted a brief interview on his way back to Conakry when they made a stop at President Bio’s farm. The French interview was interpreted by Sierra Leone’s Presidential Spokesperson Alhaji Alpha Kanu.

In his few words, Col. Doumbouya said he was happy to be in Freetown on the return visit to President Bio who was the first Head of State who visited him when they took over in 2021. He noted that by 11th September last year President Bio was already in Guinea, an action he described as indication of the good relationship the two sister countries share. President Bio visited him 6 days after the current Military Leader led a coup d’etat on September 5 last year that saw the overthrow of President Alpha Conde.

The Guinea Interim President says coming to Sierra Leone he now believes the two countries have a lot in common culturally, socially and politically. He said the visit is signifies that the bond between the sister countries remains solid.

President Bio as well regards the visit as a manifestation of the strong bilateral ties between Sierra Leone and Guinea. He started by saying that “a good neighbour is better than a family member living faraway”.   President Bio pointed out that the deep-rooted relationship between Sierra Leone and Guinea looks like one country because the two countries have so much in common to an extent that it is difficult to make distinction. He said the only visible difference is the boundaries by the colonial masters but emphasized that the relationship must be maintained.

When asked if the Yenga issue was part of their close-door meeting, President Bio responded that there is time for everything, citing Yenga is a deep-rooted problem that Col. Doumbouya needs to understand more before attempting to do anything. However, President Bio noted that there are smaller issues that the Guinea Interim Leader has consented to taking immediate action to solving.

The Guinea Head of State and his heavily armed convoy made their way back to Conakry on the same day after meeting with President Bio.