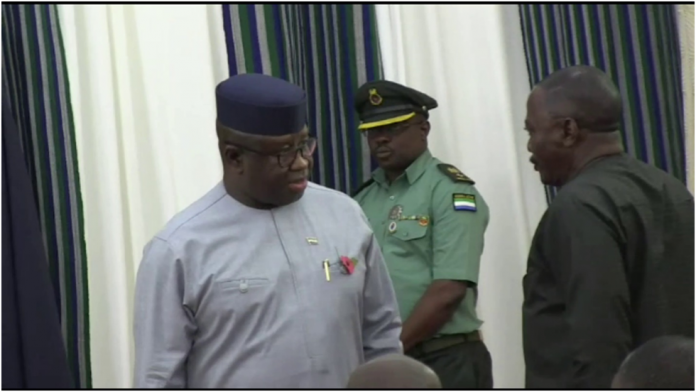 Launch of the Red Poppy Week is a symbol of remembrance and hope for a peaceful future. The Remembrance Day is observed in Commonwealth member states since the end of the First World War.   President Bio quoted the words of William Makepeace who said “Bravery Never Goes Out of Fashion” as he emphasized that the day is a special moment for all to celebrate the ex-military men and women who have been physically or emotionally disfigured in the frontline while in active service, especially those who did not make it in the 11 years brutal civil war in Sierra Leone.

The Day is observed by most countries every year on November 11 to recall the end of First World War. The Conflicts formally ended “at the 11th hour of the 11th day of the 11th month” of 1918. The blood-red poppy had long been associated with the fighting armies of Europe, and the flowers often overgrew the mass graves left by battles. The poppy remains a lasting emblem of memory in Canada, Great Britain, Commonwealth nations, and in the United States for those who served or fell in service of their country. Acting President of the Sierra Leone Ex-Service Men Association Lt. Col. Rtd. Abubakarr Kamara reiterated that the significance of the Poppy Day is to remember and honour the armed forces men and women who sacrificed their lives to defend their nations.

The Remembrance Day is not to mourn the falling patriots but to celebrate their ultimate sacrifice to protect humanity in the battlefield.