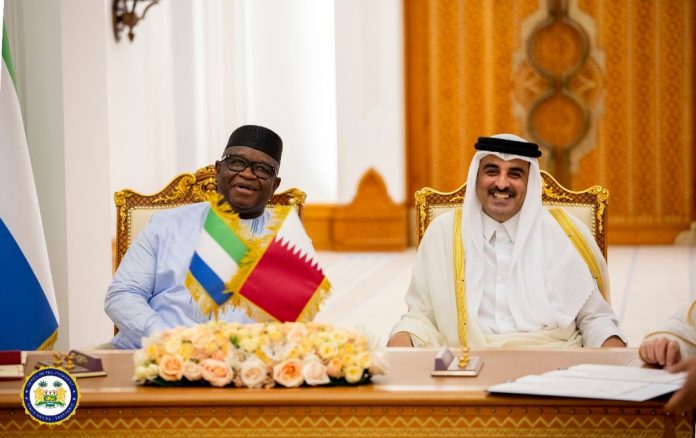 President Julius Maada Bio has held bilateral discussions with his colleague, the Emir of the State of Qatar, His Highness Sheikh Tamim bin Hamad Al Thani at the Emir’s Palace in Doha.

Welcoming the President of Sierra Leone, the Emir said that the state visit was an opportunity to rekindle the bilateral relations between the two countries, adding that Sierra Leone was an important partner to the State of Qatar.

The Emir of Qatar also stated that the bilateral engagements must be a win-win relationship for both countries and commended President Bio for the progress he had made in the West African nation for the past four years.

In his response, President Julius Maada Bio thanked the Emir of Qatar for the hospitality and informed him of the progress his government had made in various sectors, including education and the fight against corruption.

The President also expressed strong desire to focus on agriculture through mechanised farming and private sector partnership, adding that with the right investment in agriculture, Sierra Leone would become an exporting nation.