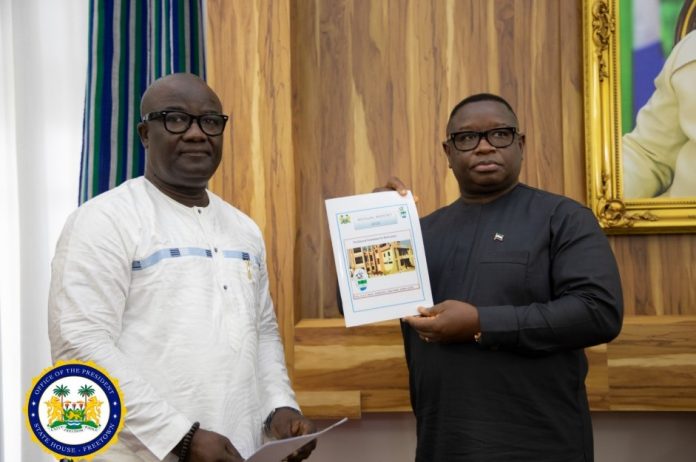 President Julius Maada Bio has received the annual report 2021 of the Electoral Commission of Sierra Leone (ECSL), saying the ECSL operates freely and independently in the fourth most peaceful country in Africa.

“A cursory look at the history of elections in Sierra Leone would highlight elite domination of politics – a mindset where a party uses a toxic blend of divisive rhetoric, misinformation, and unleashes violence – that is orchestrated and controlled by a few key players – on the voting public.

“While some parties have never used that approach; some parties have probably significantly intensified its use. They would rather not present and debate alternative policies and positions and engage citizens in peaceful ways about why their positions and perspectives are better. Our position as a Government has been that there is a better way,” he said.

President Bio emphasized that his government had and would never interfere with the work of civil society organizations and rights activists who continued to operate freely within the ambits of the law, adding that they had observed elections freely and generated and discussed post-elections reports freely on all media platforms.

“My government remains fully committed to supporting peaceful, free, fair and credible electoral processes. Dates for the parliamentary and local council elections have been declared at least fifteen months to election day. We have also proposed fixed dates for elections and other such reforms that will enhance the quality of elections and the governance space. The Chief Electoral Commissioner has also declared dates for Presidential elections in accordance with his mandate,” he reiterated.

He added that there was also greater access to justice where citizens could get redress from the courts on petitions and elections-related matters. He cited as important the establishment of the National Commission for Peace and National Cohesion and the fact that there was greater engagement of traditional and religious leaders in tamping down tensions within and between communities.

In his statement the chief electoral commissioner Mohammed Kenewui Konneh said the commission’s report focuses on the achievements in the year and planning processes in readiness for 2023 multi-tier elections within the context of the current trends of best practices in elections.

He furthered that despite the global and local social restrictions due to the Covid-19 pandemic the commission had maintained its commitment to conducting a successful by-elections and paramount chieftaincy elections across the country in 2021 adding that they undertook quit a remarkable transformation within the calendar year in terms of development of communication policy and strategy, review of human resource policies including standing orders and improvement in staff motivation.

“I was very mindful about election conflicts when I assumed office based on experiences from previous elections” he said, disclosing that that was why they had established elections conflict prevention and mediation group and that initiative had been effective and productive in all bye elections.

Chief Commissioner Kanneh also went on to state that they had made commitments to demonstrate inclusion in the electoral process and so set up a department with the objective of increasing the participation of women and persons with disability.

He concluded by seeking the support of the government and people of the republic of Sierra Leone and multilateral partners so that the commission will continue to build on its credential of conducting free, fair and credible elections in Sierra Leone including the June, 2023 multi-tier elections.