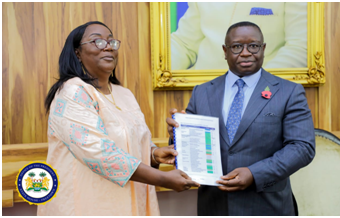 His Excellency President Dr Julius Maada Bio has received Sierra Leone’s Extractive Industries Transparency Initiative, EITI, validation report which, saying that the country’s achievement of a high score of 87.5 is truly remarkable and must be celebrated.

“I want to start by congratulating the EITI validation team members for their great diligence in seeing through this successful validation. You have made this country proud.

“To the Honourable Vice President, your direct oversight of the process has been invaluable. I urge my Ministers to emulate such sterling leadership so our nation will continue meeting and exceeding other critical international benchmarks and commitments,” he said.

President Bio, however, urged the country to continue to improve on the areas where it was yet to make rapid progress, adding that he believed that the country could improve contract transparency, systematic disclosure of production and export data, beneficial ownership, and license allocation processes.

“These additional reforms will improve overall transparency and accountability in the sector. We believe that there should be full disclosure along the entire extractive industries value chain – from how extraction rights are awarded, and how revenues make their way through government, to how revenues benefit the public.

“My government also welcomes that the EITI is an inclusive multi-stakeholder platform that also involves Government, Companies, and Civil Society to collectively discuss and map out issues of transparency and accountability in order to promote good governance in the Extractive Sector. I am pleased that this is working well in Sierra Leone and this has been acknowledged by international assessors,” he added.

President Bio concluded by assuring that Sierra Leone would continue to be a committed member of the EITI and would remain so because as a government they had made transparency and accountability a hallmark of governance.

“Little wonder then that the Millennium Challenge Corporation of the United States, for the fourth year in a row graded us among the top-performing nations in Africa for the hard control-of-corruption indicator,” he ended.

Minister of State in the Office of the Vice President and Chair of the SLEITI Multi-Stakeholder Group, Francess Piagie Alghali, said Sierra Leone commenced its first validation under the new EITI standards and the validation model which started in April 2021 to assess its compliance with each of the requirements in the EITI standards.

She noted that the validation was the global standard set for transparency and accountability in the oil, gas, and mining sectors, adding that under the leadership of President Julius Maada Bio they had progressively improved their compliance with the EITI standards.

In our last validation cycle, Sierra Leone was considered to have made meaningful progress overall in implementing the EITI standard,” she disclosed.

From April 2021, countries were being evaluated according to a revised validation model, where they would receive a score based on three components – “Transparency”, “Stakeholder engagement” and “Outcomes and impact”. The Validation process also seeks to capture the views of a wide range of stakeholders and rewards countries on the effectiveness and sustainability of EITI implementation.