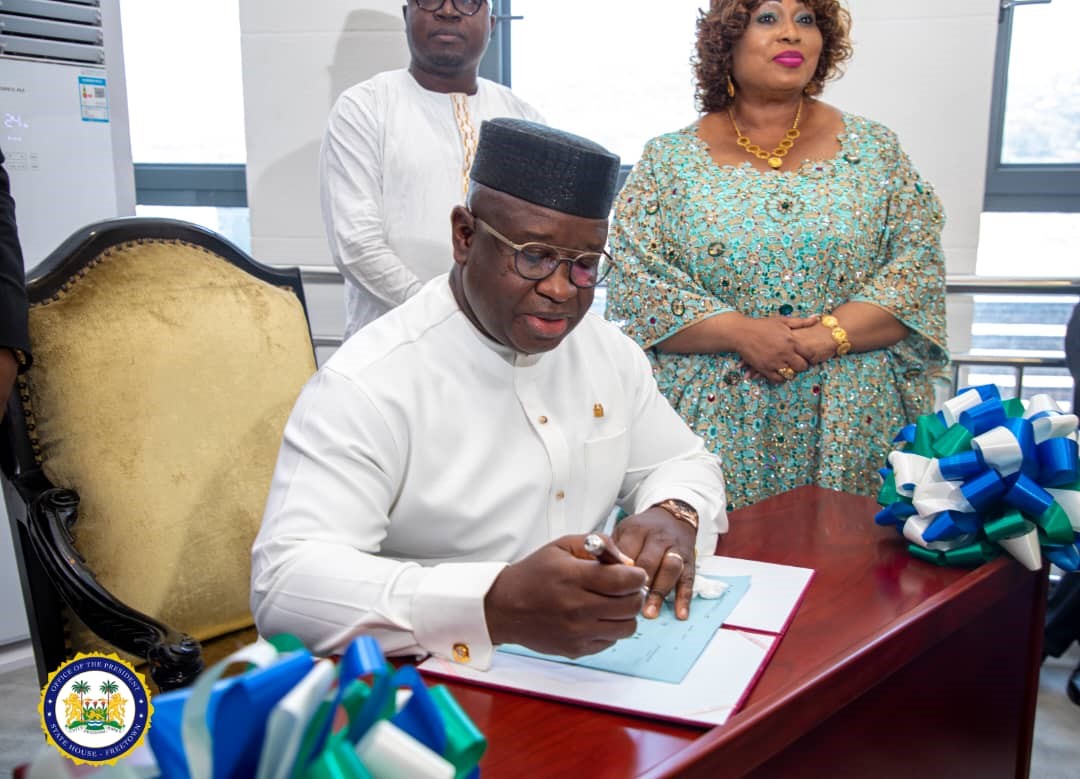 His Excellency President Dr Julius Maada Bio has signed into law the Gender Equality and Women’s Empowerment Bill 2022, now GEWE Act 2022, and cited some transformative government reforms and gender policies in the last four and half years of his presidency.

The Gender Equality and Women’s Empowerment Act, which President Julius Maada Bio signed into law Thursday, calls for a 30% minimum quota of women in parliament and cabinet. It also requires companies to set aside 30% of senior-level jobs for women, with equal pay and at least 14 weeks of maternity leave.

President Bio said: “For me, women’s economic empowerment and protection are not political rhetoric. Empowering women is essential to the health and social development of families, communities and countries. Women can reach their full potential when they live safe, fulfilled, productive lives. 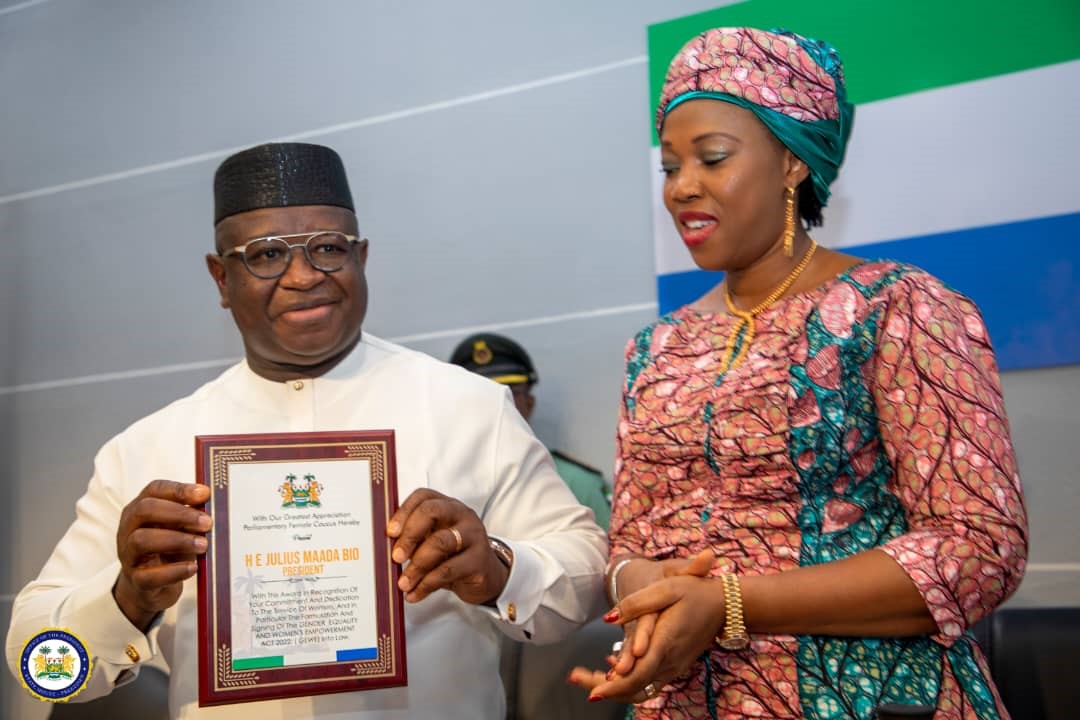 “When I became President, I proclaimed that gender is firmly on my New Direction Agenda. The future of Sierra Leone is female; we must do all it takes to facilitate the timely, full, and unconditional inclusion of women in our national life, governance, and development,” he added.

He emphasised that with the new law, they hoped to break barriers to parliamentary representation and said he looked forward to a more vibrant and diverse parliament with greater numbers of women and women’s voices.

He used the occasion to urge all political parties to go beyond the legal minimum of the number of women when they compiled their proportional representation lists ahead of the elections in June this year.

He noted that his government had taken on deep-rooted and multifaceted challenges confronting women in the country, adding that their framework for action had also taken a broad and even sweep of those challenges by introducing progressive policies and measures, reviewing existing laws and proposing new legislations.

President Julius Maada Bio also told the well-attended event, which attracted people from the private sector, gender activists, women’s leaders and girls as well as development partners and representatives from the diplomatic community, that as a government they were eager to work with them to create more jobs for women, harness business cultures that promote diversity and inclusion and invest in training programmes tailored to create more job opportunities for women. 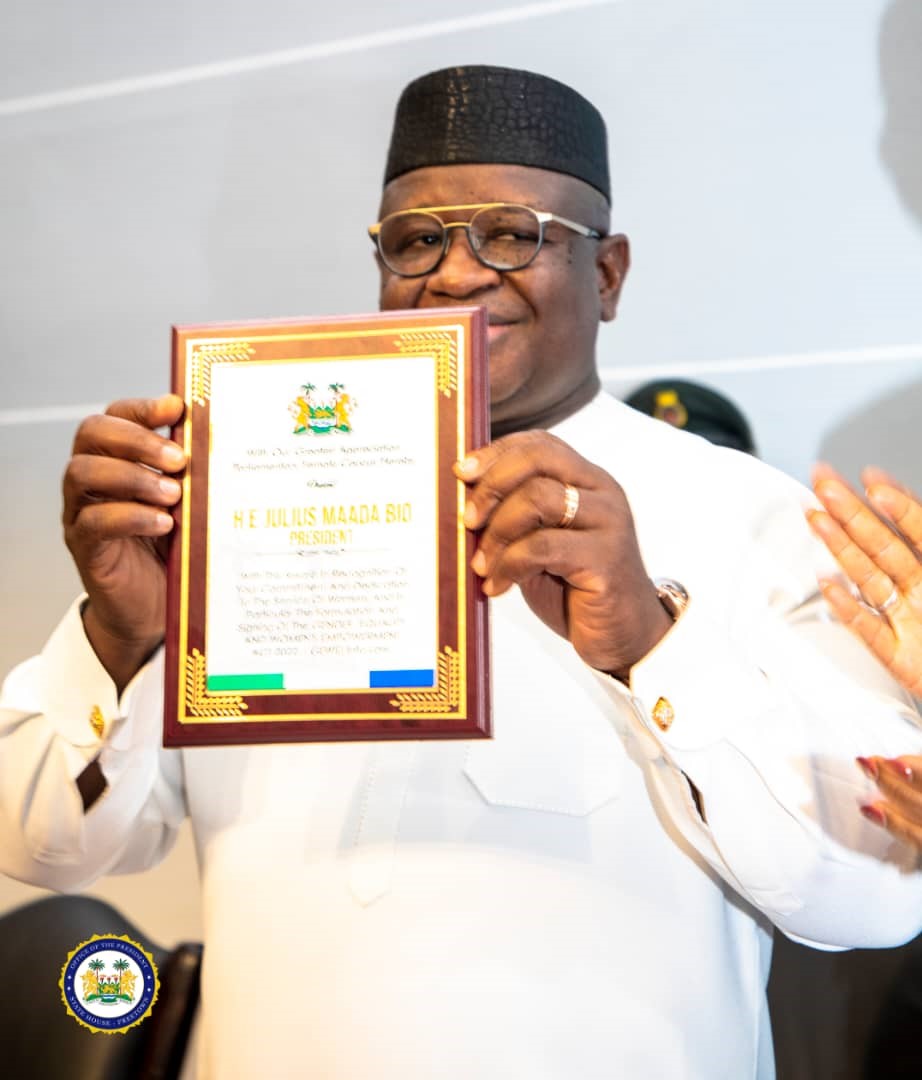 “Can we do more? Yes, and this Gender Equality and Women’s Empowerment Act, which I am signing into law today, will now address the gender imbalances in this country comprehensively.

“Mainstreaming of the gender requirements across all sectoral policies and legal frameworks; Gender Responsive Budgeting; Gender Units within every Planning Directorate within MDAs; and the creation of a multi-sectoral Gender Steering Committee to oversee the implementation of the GEWE Act,” he said.

President Bio also paid tribute to his late mother, whom she called Yei Amie, noting that she had always been the first to think of when he thought of strong women and leaders.

“I have often told the story of my humble and selfless mother, Yei Amie Navo Bio, who, upon my father’s passing, bore the burden of raising our family and inculcating in us the work ethic and sense of service I am privileged to have today.

“She and other resilient women in my family formed the foundation upon which I stand. They come from a long history of Sierra Leonean women who have been the foundation of our people and communities as mothers, leaders, warriors, educators and, very crucially, peacemakers,” he said.

He insisted that there was no path to a democratic, free, stable and prosperous society that did not include women’s central and uninhibited participation, adding that they could not have written the history of Sierra Leon’s democracy without mentioning the role of the brave women who risked and sometimes lost their lives to fight for peace.

“From Queen Nyarroh of Bandasuma (modern-day Bandajuma), a warrior, a leader, a mediator and a peacemaker; to Madam Yoko, one of our most prominent historical leaders and a notable mediator; to the prominent Madam Nenge of Baoma chiefdom born into a hierarchy of warriors.

“…to Adelaide Casely-Hayford who fought for the rights of women, the preservation of African cultural heritage and formulated a plan for girls’ education over 100 years ago; to Constance Cummings-John, who pushed for vocational education of girls and was the first woman in Africa to join a municipal council in 1938. The list is endless.

“This story is why, now that we have a stable and peaceful Sierra Leone, we cannot afford to have women, who make up 52% of our population, not featuring prominently in politics and leadership.  Women’s Rights are Human Rights. Women’s rights are not about making women better or stronger,” he asked.

Manager and Head of Office at UN Women in Sierra Leone, Setcheme Jeronime Mongbo said, “Gender has to be a priority on the president’s agenda to be able to gather this VIP crowd. Thank you, Mr. President. Equality means a state of being equal in status, rights, and opportunities”.

She further disclosed that while the world was not on track to achieving equality by 2030, she was, however, certain that the GEWE Act 2022 was shortening the road for Sierra Leone to make huge progress because the government had set a ground-breaking precedent for women’s rights and equality in the region. 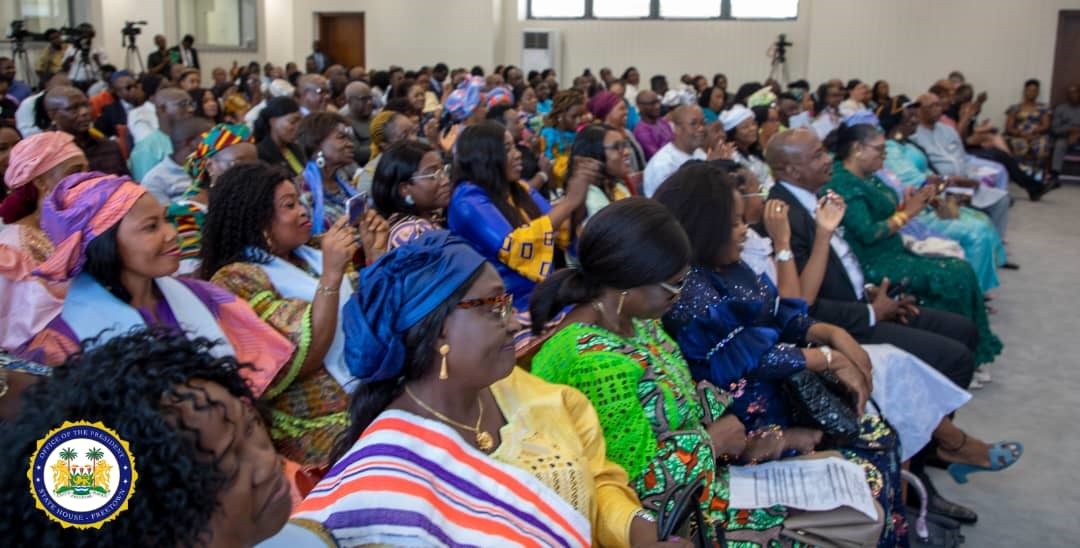 Irish Ambassador to Sierra Leone, Her Excellency Claire Buckley, said, “This is evidence of His Excellency, President Julius Maada Bio’s true and passionate commitment to gender equality and women’s rights.  Ireland and Sierra Leone are partners with a shared commitment to the Sustainable Development Goals and the gender policy, empowering women and girls, and ending all forms of discrimination and violence against women and girls”.

She added: “Today, we are one step closer to that goal. When women and men do not have equal access to resources or equal opportunities to take part in decision-making, there are direct economic and social costs”. She further stated that gender inequality was a fundamental human right but that addressing it would create the necessary foundation for a peaceful, prosperous and sustainable world.