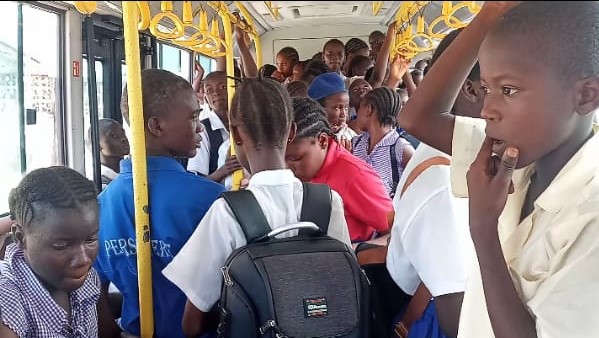 Pupils in schools across Freetown who spoke to AYV yesterday 16th November, 2022 have called on government to procure more school buses to address the issue of congestion in the existing school buses.

The pupils say they want government to procure more buses as the existing buses can no longer handle the growing number of schools and pupils using them daily.

Prince Pratt is a pupil of the Prince of Wales Secondary School. He said they usually get choked up and are always sweating in the buses when going to school and returning home after school.

He said in most days, some of them have no choice but to either stand in the buses or seat on the steps which usually lead to their uniforms getting dirty.

Fatmata Sillah a Vine Memorial School pupil explained that: “If you do not leave your house as early as 5:00am, you will not get comfortability in the buses and some of us have house chores to do in the morning before going to school”.

Francess Zainab Kamara, Acting Director of School Quality Management and Responses said the school buses were part of the free quality education package and that 12 buses were allocated to the Freetown City Council to be operated in Freetown.

She said the Ministry is indeed aware that 12 buses are not enough to take the pupils to and from school and that the ministry is working with the government to make sure more buses are procured and added to the existing buses.

Kamara said the increasing number of schools going children after the launch of the free quality education is one of the contributing factors for the issue of insufficiency of school buses for the pupils.

According to the 2020 School Census Report, there are 2.6 million school children in Sierra Leone, 50% of these children are from government assisted schools.

The free quality education which is the flagship program for the New Direction was launched in August 2018 and government has spent lots of money to make sure the program becomes a success.