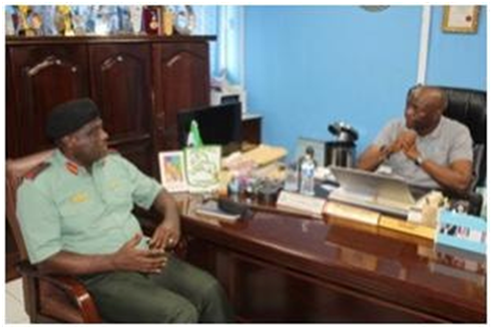 Purpose of the courtesy call was to familiarize and interface with the Management of the bank as part of the new Chief of Defence Staff’s initiative to establish and maintain mutual relationship between the RSLAF and members of the public and private sectors.

This, he said, would enhance the Civil Military Corporation (CIMIC) of the Armed Forces to reach their partners in development to establish a common link that will assist them in moving forward their respective institutions.

He further expressed his profound thanks and appreciation to the Management of the bank for their continuous service delivery to RSLAF and reiterated that Rokel Commercial Bank over the period has maintained a large customer’s base from the Armed Forces. Additionally, the CDS reiterated that there should be collaboration, coordination and cooperation at all times with the Management of the bank.

In his welcome address to the CDS and team, the Managing Director of Rokel Commercial Bank, Dr Walton Ekundayo Gilpin, registered his appreciation and highlighted the bank’s support to not only the Armed Forces but also to the Army Wives Association in the area of micro credit and other assistance to families of the military. He emphasized that the bank is a Government owned entity and operated with several branches nationwide.

According to him, the bank carries out series of activities including delivering on its Corporate Social Responsibility (CSR), especially in the area of infrastructure at the Armed Forces Education and Technical College and also mentioned future plans to support the RSLAF. The Managing Director stressed that he finds it pleasant to work with the Armed Forces due to less or no problems with Soldiers accessing their monthly salaries form the bank and therefore strongly promised to work with the military in empowering them at all times.

In his final response, the Chief of Defence Staff Republic of Sierra Leone Armed Forces applauded the bank for its various ventures and expressed special interest in the establishment of a public private partnership between the Bank and RSLAF in the area of the Armed Forces Loan Scheme.