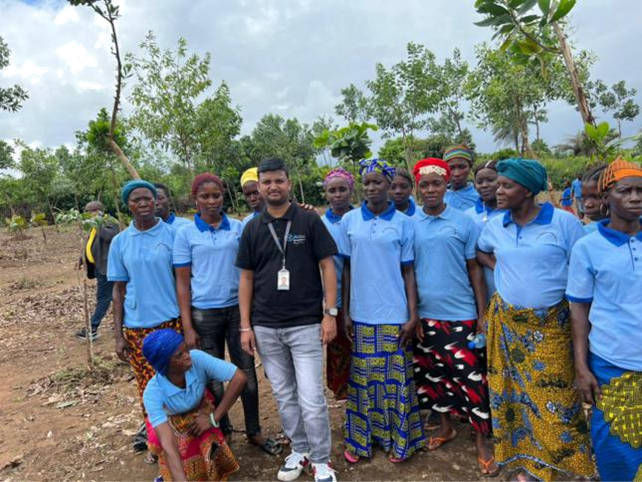 As the world braces up against climate change, a local bank in Sierra Leone, Rokel Commercial Bank has demonstrated leadership in promoting aforestation and eco-tourism to help reverse the growing trend of environmental destruction as well as promoting biodiversity in the country. Along the Masiaka – Bo highway near Petifu Kangalop, some tropical forest tress have sprung up into an imposing landmark to replace the forest cover lost decades ago courtesy of human induced environmental degradation.

The third anniversary of the tree planting project was celebrated on Thursday 21st July, 2022 with the bank’s management making bold its intention to further invest in eco-tourism and environmental protection. The event attracted prominent personalities including Sierra Leone’s Environment Minister, Prof Foday M Jaward who described the bank’s efforts as “unprecedented” and called on other corporate institutions to emulate the good example of the bank. Minister Jaward reminded his audience about the need to be responsible in our dealings with the environment as our irresponsible actions continue to pose a serious threat to our nation’s existence.

Chairman of the Rokel Commercial Bank Board of Directors, Buffy Bailor said the Bank continues to distinguish itself as a leader in corporate governance.  Apart from its overwhelming success in promoting financial inclusion in Sierra Leone, Buffy Bailor was confident that RCbank has earned the bragging rights as one of the most compliant to corporate social responsibility. He underscored the importance of staying green and commended the bank’s management for the brilliant initiative.

Managing Director of Rokel Commercial Bank, Amb, Dr Walton Ekundayo Gilpin was optimistic that the tree planting project would make the required impact averring; “..We are very pleased with the results we are seeing today… this is one worthy investment we will always be proud of.

There would come a time when this site would be developed into a nature reserve with animals and different species of plants to help boost tourism…by then it would be clear to everyone that the bank cares about tomorrow and sustainable development…” Similar sentiments were expressed by other speakers including the Deputy Managing Director, Emmanuel Borbor.