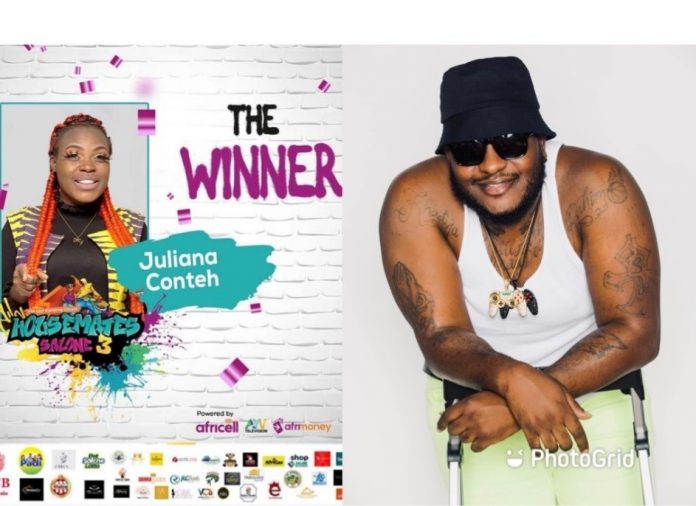 Salone Cool J on a post on Facebook reflected on how his single mother took care of him in the USA, noting also that there was a time when he was 10 minutes away from where someone close to him was killed, that was the first time he ever listened to his wife advice.

“This is one of the reasons why I supported Julie Tombo. Everybody deserves a chance to elevate in life.” Salone cool J furthered that everyone in life deserves a second chance.

“Coming to America, I thought it was a dream until it turned to a nightmare. I made a lot mistake. There was a time when I was in the streets; a follower—while my mother worked single handed giving me everything I asked for! An unforgettable time is when I was 10minutes away from being at a scene where someone close to me got shot and killed. My girlfriend now wife, after God and prayers saved me. She advised to me go home and for the very first time I listened to her! I was one of the best basketball players in high school but I chose the friends, party life and more. I’m not proud of my past and I thank God for growth. Look at me now. I’ve dreamed about this moment and I’m thankful I have an amazing family and God has been blessing me.

If you going through anything in life at the moment please don’t give up.

Although, Cool J was born in Freetown, he moved to settle in the United States during Sierra Leone’s civil war. Like everyone else who experienced the war, Cool J had a difficult upbringing, however he did not allow this experience to kill his musical aspirations. He has since developed to an act with an attractive fan base while rapping and doing movies simultaneously.

In 2021, Cool J has been at the forefront of organizing online rap contests for upcoming Artistes and has also been seen in light of charity works for the less privileged. His most revered song “Prove Them Wrong’” featuring Innocent was born out of his struggles for personal development and also a means to silence his critics in the entertainment industry.

Cool J is undoubtedly operating at the top of his game having been nominated six times in the 2021 National Entertainment Award (NEA). He is also billed for an international performance in Gambia National stadium where he is expected to thrill the audience alongside Tanzanian Superstar, Diamond Platinumz