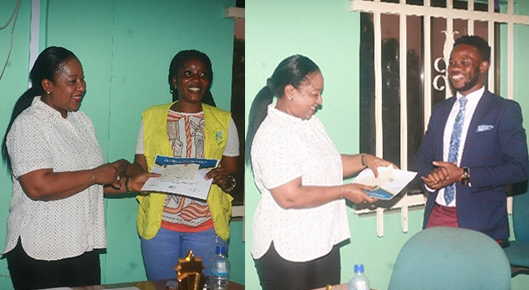 Every end of year, the Chief Executive Officer (CEO) of AYV magnanimously awards deserving staff of the Company in recognition of their outstanding work and contributions to meeting the Company’s vision and mission.

Addressing the young men and women of the Company before the awards, CEO of AYV Amb. Anthony Navo Jr. said this is the Company’s fourth Annual Awards in recognition of staff’s hard work.

He said amidst the numerous challenges faced by business in Sierra Leone these days, AYV continues to stand tall in the stiff competitive market.

The CEO expressed satisfaction that all his staff are doing masterpiece job for the Company, whiles some are putting on more effort. These he said are the staff that are awarded yearly.

He said Sierra Leone is now among the few countries in West Africa to be onboarded by the DSTv and that it is all because of AYV on DSTv Channel 399.

Counting some of the Company’s latest achievements in 2022, CEO Navo said the Company was able to successfully launch the Salone Decides project to give voice to actors of the 2023 general elections, successful hosted the Housemates Salone Season 3, and Sign MoU with the BBC among other achievements.

“I am proud of you all for making it happen. You can now be in other West African countries watching Sierra Leone through AYV on DSTv Channel 399. I am proud of AYV’s development.” CEO Navo said, while encouraging all staff to work for humanity and believe in the mission and vision of promoting the young people of Sierra Leone.

He said he was just from business meetings in Ivory Coast, Gabon and Benin completing plans to establish AYV in that part of the continent.

He said currently, the Company has strengthened and technologically empowered its USA and London branched and all its regional bureaus across Sierra Leone.

In addition, the CEO said the Company has just launched the AYV Academy aimed to groom young people to fit into the job market, he also spoke about the establishment of the NAVOTEL Multi-purpose Complex with a world class entertainment and media centre that creates space for young people to hold their entertainment events.

With all these enviable achievements, CEO Navo Jr said AYV is apolitical, with the promotion and development Sierra Leone particularly and Africa generally.

Save for the Awardees of the Staff of The Year Male and Female Awards, which are directly on the CEO’s discretion, all other Awardees were nominated by Directors and Heads of Department and processed through voting.

A senior board member of the AYV, Asmaa James, handed over the Awards and cheques to the respective winners.

Prior to the distribution of the Awards to deserving staff, the event was sadly paused for minutes to pay tribute and offer prayers for one of the Company’s most illustrious former staff, the Late Ransford Lube-Metzegar.

Other winners of the Awards include:

1. Frances John from the Marketing Department

5. George Philip Jambawai from Bo – Bureau Chief of The Year

7. Wake Up Sierra Leone – Most Consistent TV Programme of The Year

8. Inside the Barray – Most Consistent Radio Programme of The Year

9. Samuel Eric Kamara aka Money – Most Loyal Staff of The Year

11. Benjamin Thomas from FBC – Upcoming Staff of The Year