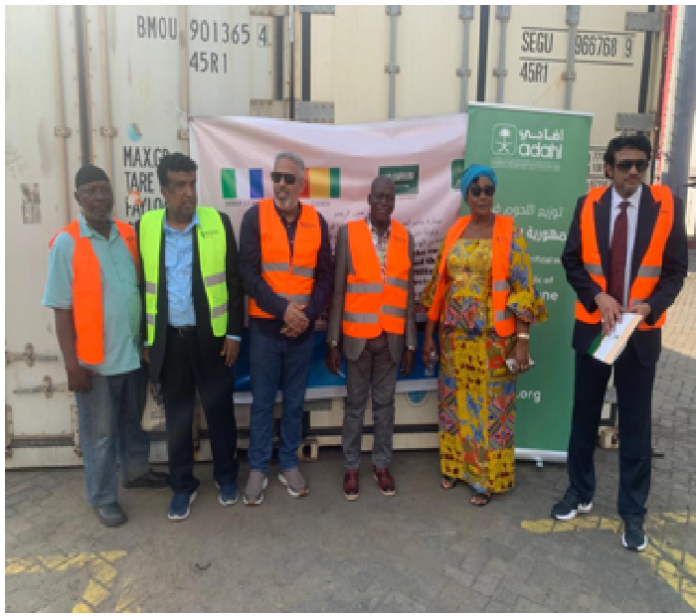 The Saudi Government in collaboration with the Islamic Development Bank has officially handed over 2 40ft containers of sacrificial meat to the Government of Sierra Leone.

In his handing over statement, Saudi’s Ambassador to Guinea, His Excellency, Dr. Hussain Nasser S. Aldakhellah, said that they were pleased to present the over 2,500 carcases of sacrificial lambs to the Government and people of Sierra Leone through the Ministry of Social Welfare to be distributed to the needy in different communities in Sierra Leone.

He noted that the gesture is based on the good relationship that exist between Sierra Leone and the Kingdom of Saudi Arabia and that the exercise is under the project of sacrificial lamb of the Islamic Development Bank, which it executes every year.

“I am therefore pleased on behalf of the kingdom of Saudi Arabia and the Saudi embassy in Guinea and Sierra Leone and the Islamic Development Bank to officially hand over the consignment” he said.

He stated that the gesture will be a rewardable one in this world and hereafter and prayed that all those who participated in the process be rewarded.

In her response, the Minister of Social Welfare, Baindu Dassama-Kamara, on behalf of His Excellency President Dr. Julius Maada Bio, expressed gratitude to Saudi Arabia for considering Sierra Leone amongst other African nations, adding that the meat would serve as a support to the Government and people of Sierra Leone.

She attested that every year, Sierra Leoneans go to perform hajj in the Kingdom of Saudi Arabia and that they always come back with very commendable reports on the hospitality that they receive from the people of Saudi.

She concluded by stating that similar gesture comes from the Saudi Government every year and that the Ministry in collaboration with the Muslim Community always share the meat to different communities.