School for the Blind Principal Applauses Braille Use in Public Exams

School for the Blind Principal Applauses Braille Use in Public Exams 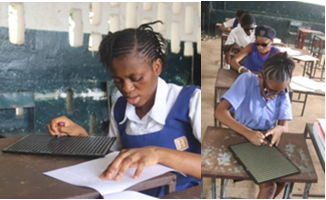 “The greatest disadvantage in using the typewriter is that you sometimes even turn the carbon over because you cannot see, and you may not even know until you have typed two or more pages and later somebody comes to watch at them and notices that nothing appeared.

This can be very frustrating. But the use of the slate and stylus which the pupils are using now, is making them very comfortable and has yielded dividend,” according Mr. Turay.

The use of braille in external examinations was introduced by the Ministry of Basic and Senior Secondary Education (MBSSE) last year, and since its introduction, there has been tremendous progress in the performances of visual impaired pupils in public examinations.

According to Mr Turay, for the first time in the Ministry of school, they recorded 100 percent passes in the 2021 BEC, with every pupil who took the examination transition to senior secondary school and two of the three students who took the 2021 WASSCE got university requirement with one of them reading law at the University of Sierra Leone.

“Presently, we are having visually impaired kids taking the BECE. We are looking forward to another 100 percent pass rate because when they are taking the examination in braille, they are comfortable and feel relaxed. They can read their questions for themselves and write their answers in braille as well,” he said.

As a visually impaired person himself, he said the year he took the BECE not all of them got the requirement to go to senior secondary school because they were using the typewriter.

“We thanked the MBSSE particularly the Minister Dr. David Moinina Sengeh for not only introducing the Radical Inclusion Policy, but also implementing what the policy dictates. The Minister has manifested that he has passion for not only children, but children with special needs,” according to Mr. Turay.

Dr. David Moinina Sengeh Minister of Basic and Senior Secondary Education said the ultimate goal of this policy is to generate a critical mass of highly educated, trained, and skilled Sierra Leoneans with the capacity to fulfill their potential, contribute to the national and global economy, and deliver better leadership and services in the public sector, noting that the Ministry is grateful for the opportunity to provide the first ever policy on radical inclusion in education in Sierra Leone.