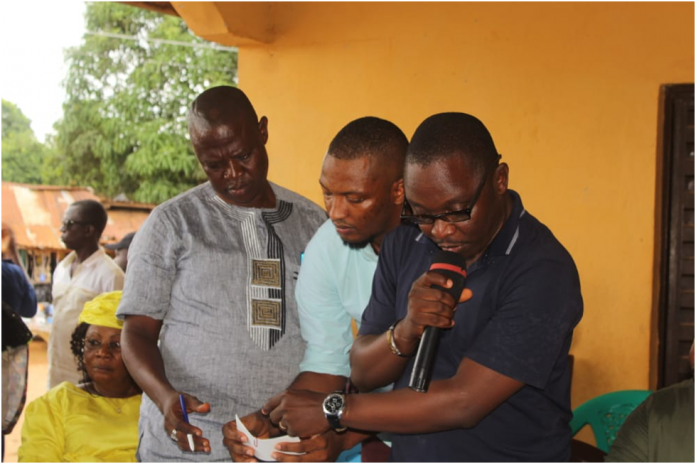 By George Philip Jambawai in Kenema

The Sierra Diamonds Company Limited, operating at the Lower Bambara chiefdom in Kenema district has paid the sum of Eight Hundred and Seven Million Old Leones to landowners in its operations areas within the chiefdom.

Speaking to AYV, Tommy Kaiza Koker, Government and Community Relations Affairs Manager of Sierra Diamonds Company Limited said 50% of this amount will go directly to the land owning families and the remaining 50% is being segmented into four other categories – (15% goes to the Paramount Chief, 15% to the district council, 10% to the chiefdom administrative fund and 10% to constituency development fund being controlled by the Member of Parliament.

He said the new Mining Development Bill 2021, passed by parliament but yet to be signed by the president is why the company is still paying this amount of money according to the old Act of 2009.

However, next year’s surface rent payment he said will be according to the new Mining Development Bill 2021 which should have been signed by the president by then.

At the moment, Tommy said the Company is currently focusing on mining for diamonds in four sections in the Lower Bambara chiefdom, Fallay section, Sei section, Nyawa section and the Bonya section respectively.

“These four, out of the seven sections, are benefitting today and this is because our concession area covers directly four sections. Remember, this is a surface rent so we are only paying people who are directly impacted by our operations.” Tommy noted.

He went on that at the moment, the Company is not making any profit because it is still in its development stage and has not even entered into commercial production yet.

As a Company, he went on they have developed so many mechanisms that see them engaging with community people and landowners to discuss frankly on rising issues for timely resolutions.

He assured his audience that the company is in the chiefdom for good and they will continue providing development for all thereby improving on the lives and standards of the people and community.

He said one of the Provisions of 2009 Mines and Mineral Act, Section 34(a) clearly tells the Company to pay surface rent to landowning families and other stakeholders as provided in the agreement.

He observed that the expectation of the people is high but appealed to all to exercise some patience as brighter lights will continue to shine in the chiefdom.

Sierra Diamonds Company Limited is a subsidiary of Newfield Resources, an Australia-based company. In 2018, there was a takeover of Sierra Diamonds which has been in existence in Sierra Leone since 2007. This was witnessed by a tribute mining agreement between Sierra Diamond and Tongoma.

In terms of employment, they further thanked the Company for first starting from the community where the mining is taking place before extending to other communities within and out of the chiefdom.