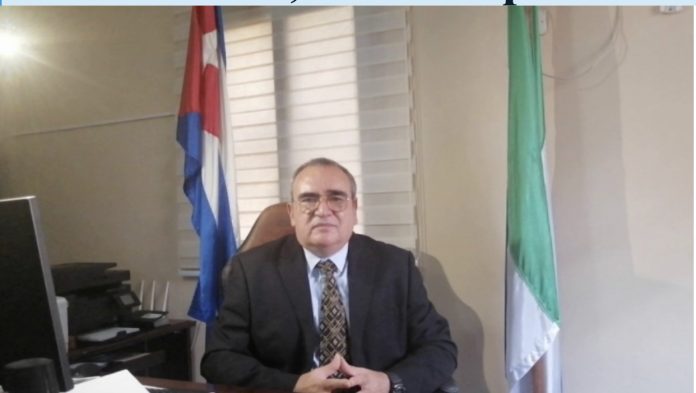 April 24, 2022 marks the 50th Anniversary of the establishment of Diplomatic Relations between Sierra Leone and Cuba.

Addressing the nation over the weekend, Chargé D’affaires of the Republic of Cuba, Ambassador Félix Raúl Rojas Cruz said on April 24, 50 years ago, Cuba, in the distant Caribbean, and Sierra Leone, on the African continent, paid tribute to more than a million men and women from West Africa who were chained and transported to Cuba to serve as slaves on the other side of the ocean, by establishing diplomatic relations, as a sovereign and independent decision of its peoples.

He said the fundamental contribution of Africans and their descendants to Cuban nationality was their spirit of rebellion, their love of freedom. According to him, they were the first bastions in the struggle against colonialist oppression and created the conditions for the subsequent War of Independence, a necessary war, a war of liberation, which, for almost a century, culminated on January 1, 1959 with the triumph of the Revolution.

The Chargé D’affaires went on that on April 24 1972, relations based on friendship, mutual respect, political dialogue, collaboration and solidarity began. “Relations that we have perpetuated for half a century by our common positions in favor of peace, international law and sustainable development” he added.

When on May 7 of that same year, 1972, he sighted, just after establishing diplomatic relations between Cuba and Sierra Leone, the leader of the Cuban Revolution, Fidel Castro, in his words of greeting during his visit to Freetown, stated that “in this task of the Sierra Leoneans to build the homeland, to carry it forward, they could definitely count on their Cuban brothers,’’ unquestionably he was leaving a legacy that has been fully fulfilled during this half century of diplomatic relations.

The Chargé D’affaires said throughout all these years, bilateral relations have been strengthened. As we recently recalled, it was in Cuba that young Sierra Leoneans prepared to defend their country, at the request of then President Siaka Stevens.

He said Cuba has contributed to the training of men and women of this land who today are engineers, technicians, doctors, professionals in different sectors, adding that from Cuba came the doctors in the Henry Reeve Brigade, who were among the first to battle with Ebola, risking their own safety at a time when very little was known about the disease.

They returned in 2017 to support Sierra Leoneans who suffered from the landslides in Freetown and then in 2020 to fight against COVID-19.

It has been half a century of diplomatic relations, which laid the foundations for a historic relationship that transcends distance because it is based on common roots, on an ancestral culture that still vibrates in the dances and customs of our peoples.

We wish to express our gratitude to Sierra Leone, for its historical support in the battle against the blockade imposed on the Cuban people for more than 60 years; to his support for the resolutions against this criminal policy in the framework of the United Nations General Assembly and in the African Union.

The Chargé D’affaires said: “We cannot fail to mention the many messages received greeting this 50th anniversary of the establishment of diplomatic relations between Cuba and Sierra Leone from solidarity organizations, Sierra Leoneans who graduated in our country and those who are still studying in Cuba, among others. There can be no room for doubt when we assure that Sierra Leone can always count on Cuba, that it will continue to share what it has and not what it has left over, as it has been during these 50 years, despite the blockade and the policies against our country based on in force, arrogance and lack of common sense. I do not hesitate to repeat once again that Africa, especially Sierra Leone, occupies a special place in the hearts of Cubans. Long live the brotherly relations between Cuba and Sierra Leone. Long live the peoples of Cuba and Sierra Leone. Una tenki plenty n bye bye.”