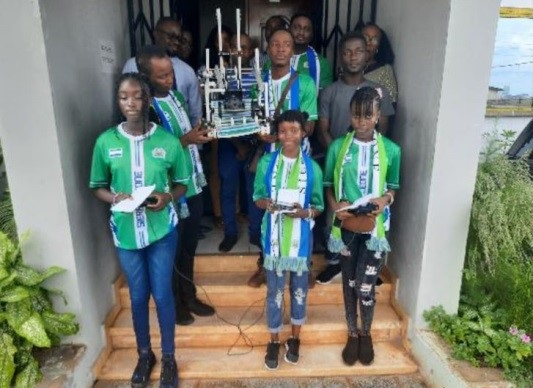 The Team Lead and Outreach Officer at the National Commission for Children, Mamud Keita, has said Sierra Leone will be challenging over 120 countries for this year’s Olympic-Style Robotics Global Event in Geneva, Switzerland.

He said 6 participants were drawn from the previous Science, Technology Engineering, and Mathematics (STEM) competition that involved 30 schools across the country.

He made this statement ahead of the delegation’s departure to the competition in Geneva slated for 13th to 16th October this year.

The Global Robotic Competition will feature 180 countries including Sierra Leone. The theme for this year’s event is Carbon Capture and the focus on this year’s events for school pupils across the Globe is to see participants competing on how to provide better solutions on Global Warming.

Outreach Officer of National Commission for Children and Team Lead for the Science, Technology, Engineering and Mathematics (STEM) Project, Mamud Keita while giving insight of the competition on Sierra Leone’s representation said these set of pupils were selected from their competition for 30 STEM clubs in Schools across the country.

Giving an overview of the Global Robotic Championship, Deputy Commissioner of the National Commission for Children, Fabundeh Ansumana highlighted that one of the key mandates of the commission is the right of children to participate and this to do with their development, right and welfare.

Among the six participants that will represent Sierra Leone in this year’s first Global Robotic Competition is Betlucia Williams from the Saint Joseph Junior Secondary School in Freetown.

She said the design of the robot they did will collect balls which will enable to score points. She noted that they use team spirit to build the magnificent robot and they are sure to do well in the four-day robotic competition for Sierra Leone.

The Sierra Leone delegation has already departed for the competition and is hope to return on 19th October this year.