Sierra Leone fails to qualify for AFCON under-23 competition

Sierra Leone fails to qualify for AFCON under-23 competition 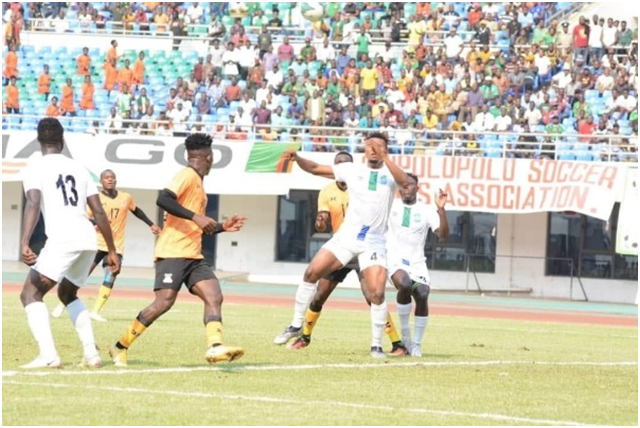 Sixty fifth minute goal from substitute Andrew Phiri for the junior Chipolopolo side of Zambia against Sierra Leone was enough to seal a 2-1 aggregate in the Total Energies under 23 AFCON qualifiers second leg in Lusaka Zambia. The Zambian under-23 team has qualified from the third to the final spot where they will either Eswatini or Egypt which will determine who will go to 2023 AFCON under-23 competition hosted by Morocco. The first leg between the two Nations ended one all after Sierra Leone conceded a late penalty against the opponent at the SKD Stadium in Liberia. The Sierra Leone under-23 team honored the returned leg with high intensity from the squad after a brilliant performance from the first leg. The second leg between Sierra Leone and Zambia was a decider that saw the host seal their way to the next stage after second-half substitute Andrew Phiri got the only goal to separate the two sides after 90 minutes of play.Speaking on the outcome of the match in a post-match press conference, the Head Coach of Sierra Leone National Male under 23 team, Amidu Karim said he is proud of his boys especially with their performance but noted that they failed to utilize their chances in the match “this will serve as a learning point for them and we hope to improve that aspect,” he said. The Young Chipolopolo of Zambia are now through to the final round on 2-1 aggregate score and will face either Egypt or Eswatini. Eight qualified countries will compete in the U-23 AFCON in Morocco January next year. The top four countries in the continent will be part of the 2024 Paris Olympic Games.