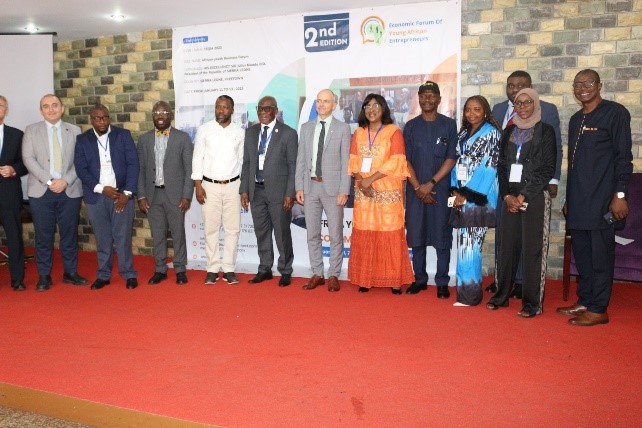 The 2nd edition on Young African Entrepreneur Economic Forum (AYEF) and the Young Entrepreneurs Network has been completed in Freetown.

The three-day conference with the theme: “Contribution of the African diaspora in the development of youth entrepreneurship for a revisited south-south cooperation” supported by the United Nations Office for South-South Cooperation (UNOSSC) through UNDP, The Deutsche Gesellschaft für Internationale Zusammenarbeit (GIZ) mainly targeted young entrepreneurs in Sierra Leone.

In his welcome address and introduction of the Chairperson, Nabie Yayah Yansaneh, Country Manager of the on Young African Entrepreneur Economic Forum (AYEF) and the Young Entrepreneurs Network, said the first edition of the conference was hosted in Cameroon which the first winner had a business trip to Germany, noting that the program is a continual project.

He further that, the project is to bridge the cap of unemployment and increase the remittance in Sierra Leone by encouraging entrepreneurs to have a link out of Sierra Leone and also encourage their customers in Sierra Leone to use their local products that are produced in Sierra Leone which will generate income and bring stability to the country’s economy.

“With our economic difficulty here, that is why the institution is here to stay to encourage and build the capacity of unemployed youths and sell their products within the country and outside the country,” Nabie said.

He added that this institution is here to link young entrepreneurs and that they are capacitating and training the youth of this nation. After the training, he went on, these young entrepreneurs pitch their business ideas which has been sent to a panel for discussion and will be announced.

Just as the first winner won a trip to Germany, it will apply to the second winner of the second edition.

Speaking on behalf of the Dr. Ralf Zimmermann, Programme Coordinator, Joseph B. Michael said on one hand; micro, small and medium-sized enterprises (MSMEs) are key drivers to the economic growth of any country and Sierra Leone is no exception.

Micro and small enterprises are widespread in Sierra Leone as opposed to large and medium-sized and are playing significant roles in the country’s economy but yet, they continue to face a number of challenges in relation to business enabling environment, access to durable business development services and access to finance.

On the other hand, he went on Sierra Leonean diaspora plays an important role in the development of the entrepreneurial project in their country of origin, as encouraged by the African Union to reach the development objectives of the Agenda 2063.

“This is why we support this ambition of training and accompanying young African entrepreneurs through the Economic Forum of Young African Entrepreneurs, organized by the Youth Entrepreneur Network,” said Joseph.

He pointed out that, according to World Bank Economic update on “Leveraging SME Financing and Digitization for Inclusive Growth” of 2022, low business skills among entrepreneurs are making it challenging for SMEs to grow into creditworthy or investment-eligible enterprises as providers of both risk capital and bank financing.

This means the majority of MSMEs who are still in the informal stage lack the ability to develop simple business proposals and do not keep records of their business transactions.

As the government strives to urgently develop adequate financial services that address the specific needs and financing requirements of SMEs in achieving economic growth and improved livelihoods, development agencies like the German International Cooperation continue to provide financial and non-financial business development services to SMEs as a way of addressing some of the core challenges that will make them investment ready.

He added that, currently, 1800 new businesses are supported to improve their competitiveness – offered loan opportunities at reduced interest rates. 1150 businesses supported through the SME Loop, a 6-month coaching and training cycle, among which 250 are selected to receive an in-kind grant to pursue their growth strategies. 5 newly introduced BDS 4 formal medium-sized enterprises supported in their strategic development.

In her address, the President of the organizing committee of the African Young Entrepreneurs Economic Forum Mefi­re Njoya, Aichetou, gave a brief background of the workshop, President of the organizing committee at AYEF, Mefire Njoya Aichetou said the workshop is an annual high-level meeting which aims to bring together young Africans living in Africa and those of the diaspora around Economic issues for promotion of the African Free Trade Area for better involvement of the African Diaspora in a revisited inter-African cooperation.

She said the African Youth Entrepreneurship Forum started in 2018 when she started working with the cocoa farmer and during that time, she realised that there were so many cocoa farms from the international organisation, adding that they decided to set up a big platform to bring people together to establish their product.

Aichetou continued that the African Youth Entrepreneurship Forum represents the largest conference carried out by African Diaspora organizations as approved by Article 3 of the Protocol on the Amendments to the Constitutive Act of the African Union on the Role of the Diaspora, and the Framework Convention of the Citizen and Diaspora Directorate of the African Union (CIDO).

She said in accordance with the resolutions of the second diaspora focal points workshop 2018 in Khartoum, where young entrepreneurs and African diaspora stakeholders from around the world are actively engaging with young African entrepreneurs, local communities, and governments in the fight against unemployment, promotion of self-employment and development of Africa by leading and participating in a multitude of initiatives at the local, regional and continental level.

The Charge d’ Affaires at German Embassy in Sierra Leone, Partick Dzierzon said Sierra Leone remains one of the least developed countries in the world, ranking on place 182 out of 189 on the Human Development Index 2020.

He said high rates of underemployment as well as unemployment represent a constraint to the socio-economic development and posed a risk to the political and social stability of the country.

He continued that youth and women in rural areas of Sierra Leone are particularly affected and 60-70% of the working population classify as working poor, meaning that despite their employment, the household falls below the poverty line so they are taking the lead to engage in entrepreneurship.

Adding that, during the display of products made by entrepreneurs, he felt good because they are good products and it would benefit everyone in the country including those from the diaspora and the event was gender balance.

He said Sierra Leone is a rich country and it rich in a big quantity of neutron and human resources, but unfortunately, the country is yet to benefit much from those resources because the economy is weak and not very dynamic which mainly characterized by agricultural production of a few raw materials such as oil palms, rice, coffee and cocoa with little value added in the country.

At the same time, the level of education in Sierra Leone is also still very low and there is a mismatch between supply and demand in the labour market. The lack of basic education and skills as well as practical, quality technical and higher education and training has a negative impact on productivity, self-employment and entrepreneurship and thus on the potential for creating new jobs.

“The young entrepreneurs need to be the driving factors for the country’s development by creating jobs, creating innovation and encouraging others to go into entrepreneurship. We would continue to support Sierra Leone and create value at home in order to drive sustainable development, so we would stand by your side developing the country into real values,” Partick Dzierzon said.

GIZ Representative, Joseph Michael stated that micro small and medium size enterprises are key drivers to the economic development of the country and Sierra Leone is not an exception.

Even though micro small and medium enterprises play a significant role in the country’s economy development yet still they are continually faced with a number of challenges which are business enabling environment, access to durable business development services, and access to finance.

GIZ as a development cooperation partner is here in Sierra Leone to contribute to improving African diaspora in the development of youth entrepreneurship in Africa.

He further that currently 1800 new businesses are supported to improve their competitiveness through all the district they are operating which mean they will offer loan opportunities interest rate through the device that they have and they have support 1150 and several other businesses in the country.

Delivery the keynote address, Sierra Leone Minister of Youth, Orman Bangura, said the flagship program of President Julius Maada Bio happens to be human capital development and from the African Union context, he is impressed with such a brilliant and wonderful initiative led by a continent body to African Union and what is more encouraging is that the African Union has defined a role for its diaspora and has also taken it further to establish a framework convention of the citizens and diaspora for a directorate of the African Union.

He further encouraged young entrepreneurs to make use of the opportunity which is given to them.

According to the Chief Director of the Ministry of Trade and Industry, Emmanuel B. Konjoh, for the past 4 years, they have increased their GDP from a single digit to a double-digit and their target is to reach 25%.

He disclosed that just last week they have signed four agreements to open 3 new cement manufacturing offices and oil farms.

Today the young ones, over 4000, about 80% have benefited from the government grant program and they have launched the Munafa fund where 4100 have benefited and now 5290 are also going to benefit from the fund. And finally, he advised the youth to be business oriented.

Head of Interpol – Superintendent Mohamed Sidibay advised the youth not to travel illegally as it is harmful to them and their families. He pointed out that one of the solutions is entrepreneurship.

During the closing ceremony, Sierra Leone Ambassador to the Federal Republic of Germany Dr M’Baimba Lamin Baryoh stated that he never knows that such a program existed in Sierra Leone and he is impressed with the number of young entrepreneurs and their products which he thinks can be sold out of the country.

He further that their youth are doing exceptionally well in terms of innovation and entrepreneurship and the government is doing everything to support the youth of this country.

Participants showcased their talents in different products and skills. They described the conference as the best ever because they did not only meet and discuss but also connect and sell their products.

Previous article
“We have done extremely well. But we have to do more on the economic front” …President Bio urges new Finance Minister
Next article
Wusum Hotel Commits to Provide More Jobs for PWD’s
Business