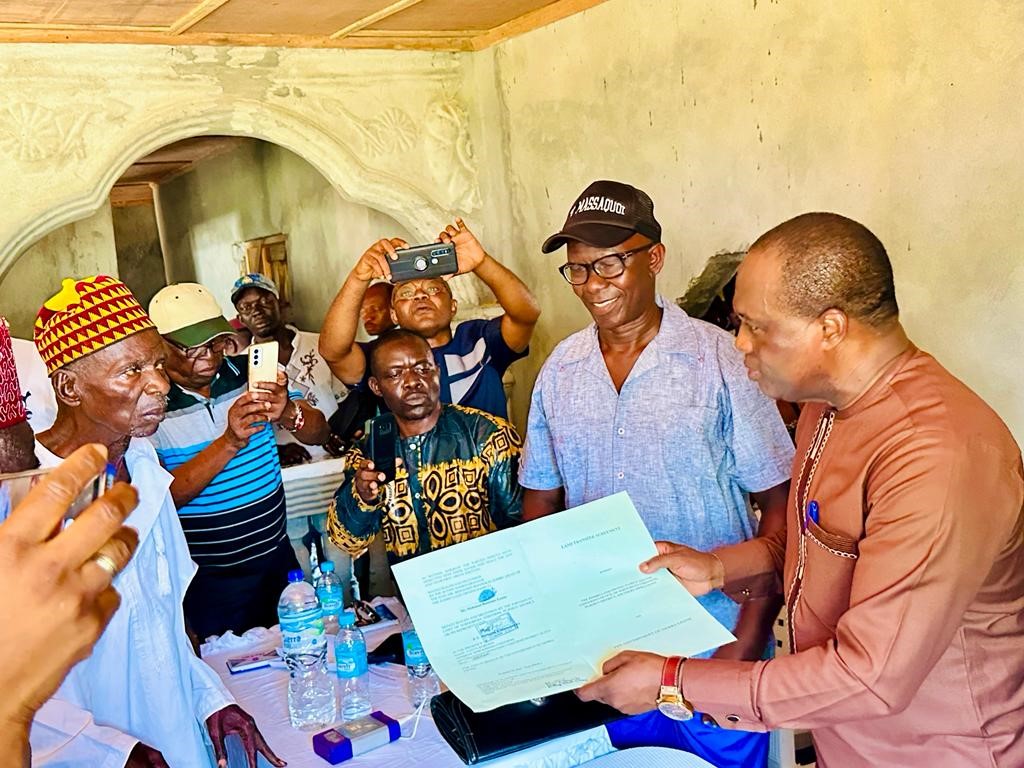 Residents of Jendema, Soro Gbeima chiefdom in the Southern part of Sierra Leone have provided a 20 acres piece of land to government for the construction of a Cross Border Post between Sierra Leone and Liberia.

Minister of Planning and Economic Development, Dr. Francis KaiKai on behalf of government appreciated the Zombo Family and the People of Soro Gbeima chiefdom for their show of goodwill in granting the land to host such an important project that would connect Sierra Leone to Liberia.

He said the project will also ensure transformative approaches to inter-state trade, free movement of people, security issues and the mobilisation of resources through the National Revenue Authority.

He commended the residents for their great commitment demonstrated to owning the project and also recognised the relentless efforts of local authorities, MDAs, women and youths.

The minister relayed government’s commitment to the project and went further to explain about the recent development in-roads made by government to improve on the lives of people.

“The multi-stakeholders project intends to boost our local economies through the creation of job, thereby bringing government closer to the People. The project also includes the provision of basic amenities, such as schools, community centers among others.” Dr. Kai-Kai added.

He said the joint border posts will ensure better trade facilitation through a one-stop customs, simplify customs procedures, improve cooperation and coordinate controls, that would encourage the sharing of data and intelligence, and step up the fight against fraud.

He noted the efforts of government in making sure that work commences towards achieving better regional integration and reduce trade, administrative and financial barriers to road transport in West Africa.

Foday Yusif Kamara, District Officer, thankfully appreciated the government and the ECOWAS Commission through the Ministry of Planning and Economic Development for making the project a reality.

He assured of their commitment to work with the team while looking forward towards the commencement of the project.

Earlier in his welcome address, P.C Mustapha J. Massaquoi III, heartily welcomed the team from Freetown to the Soro Gbeima chiefdom. He expressed appreciation and gratitude to the team and the ECOWAS Commission for choosing his chiefdom for such a compacted project, which he said will contribute to both infrastructural and Economic development within the Pujehun district.