Sierra Leone mobile internet at risk of being shut down: Why not increase the tariff to ensure sustainability?

Sierra Leone mobile internet at risk of being shut down: Why not increase the tariff to ensure sustainability? 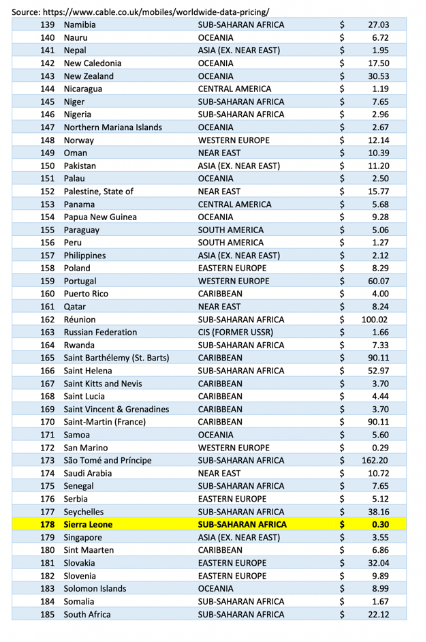 In fact, compared to the average of all the countries, Sierra Leone appear to be among the countries with the lowest cost of internet tariff in the world.

While everybody likes cheap mobile data. We all know that chape data is not sustainable in the current economy crisis.

The recent move by mobile companies to increase internet tariff shows that they are seeking to meet the “good” and “access” attributes by increasing costs a little bit.

And yet, the government of Sierra Leone has already intervened to reduce the cost of mobile tariff and further compounded the growing crisis of poor internet access in the country.

It is important to note that the more investment mobile companies make in equipment, staff, and expansion of coverage to other part of the countries, the faster and better your internet and mobile service will be.

Currently, only 13% of Sierra Leonne’s population has access to internet and this is due to the lack of investments in the private sectors.

In addition, network quality is relatively weak, with Sierra Leone ranking 168 out of 173 countries for quality and speed (Speedtest, 2021). Internet connectivity is particularly low amongst businesses, although this is not unique to Sierra Leone.

Beyond the DAI, Sierra Leone ranks 126 out of 137 on firm-level technology absorption (WEF Global Competitive Report).

Initiatives such as the recent unbundling of SALCAB to a private sector entity (Zoodlabs) is expected to increase operational efficiency, improve wireless access and reduce the cost of internet connectivity for the private sector.

These broad measures suggest scope for further improvement in digital adoption across different user groups in order to reap the maximum gains that comes with technology adoption.

Sweet Salone – a popular blogging platform in Sierra Leone says ‘’internet connectivity is a way of life and a fundamental human right; it is playing a great role in our everyday life.

Be in mind that with internet connectivity our entertainment and the educational sector can be connected to endless opportunities”, Sweet Salone Blogging platform stated.

Out of 3,300 surveys conducted by Salone Online News shows that, 88% of customers expect good mobile services, that is fast and accessible. Some consumers are even starting to switch over to companies that provides fast and good internet services, regardless of the costs.

Take, for example, young people who are creating videos for social media platforms including Tiktok and YouTube are opting for high-cost internet packages that offer fast and good internet connection. They understand that people are more likely to continue using their platform if they get an enjoyable experience, quickly.

This finding offers a new explanation as to why mobile companies are seeking to increase cost of tariff. According to the researchers at the independent Sierra Leone Research group, what sets the Sierra Leone apart may be inflated prices across the board.

The report sheds new insight on how the Sierra Leone telecommunications industry compares to other countries, and the fact that the cost of labour, equipment and administrative organisation seems to be high amid the economic situation.

It also points out that, despite that level of spending, too many of their services remain low, but this is not sustainable. The result is poor service, making it difficult for expansion to allow more people across the country to access mobile and internet services.

Agneska Sablovskaja, lead researcher of the Surfshark report said: “People who can’t access the internet are cut off from the digital opportunities that people from higher-income countries have.

Without internet access, people can’t study or work online, and they can’t grow their economy with digital exports. The internet is also very slow in lower-income countries.

Even if people from these countries can afford the internet, they still face limitations in what they can do. For instance, internet speeds in lower-income countries make it very difficult to make video calls.”

In Sierra Leone today, the inflationary rate stands at 33%. Prices of basic commodities keep increasing and the cost of living is becoming more burdensome for the vast majority who cannot even afford a square meal a day.

The prospects and challenges in the telecommunication sector filter into the economy. After all, a dollar in salaries from a mobile company spends the same as a dollar from the energy company.

When mobile tariff prices are high, companies spend more on equipment, supplies, salaries, and the like – money that enters the economy in much the same fashion as a boom in any other sector.

The research found that the cost of telecommunications companies doing business is becoming challenging.  The cost of Terrestrial Fibber (Leoncom) has gone up.

The cost per Mbps that was $0.4 has also increased to $10 recording a 2,400% increase. Besides, the cost of electricity tariff has also become challenging. Mobile companies rely on consistent and 24/7 energy to be able to provide mobile services.

Electricity tariff, which is a similar utility service and a cost driver for telecommunications businesses, has witnessed a significant increase of 78% from Le1,890 (old leones) to Le3,364 (New Leones) as of July 2022. It should be noted that since SALCAB folded up and Zoodlabs took over control of the internet facility in the country, there has been improvement in terms of speed, but this comes with cost.

It is important to note that at the beginning of 2022, the cost of 1 Gbps data from Zoodlabs was Le 156 million (Old Leones). Today, it is Le234 Million per Gbps recording 53% increase in the direct cost of internet.

As well as food and energy costs rising, mobile companies are also having to deal with inflation going up, due to increased dollar rates. There have been rapid increases in Foreign Exchange rates against the Leones. The present-day value of the UD Dollar is at Le. 18,000 (Old Leones) to $1. This record an increase since the last time the GSM tariff adjustment took place the exchange rate was far below what it is today.

This has not resolved a situation that is becoming more compounded by external forces which are beyond the control of the GSM Companies. It appears that antagonists did not understand the concept of value for money. Put your money where your mouth is.

Under such a debilitating economic situation, there is every indication that sooner rather than later telecommunications companies operating in the country will soon take the decisive situation of whether they should increase data prices for the various services they are currently providing, mainly voice calls and internet services or to withhold their services provided their demands are not met or a common understanding not arrived at with the requisite authorities.

“As citizens, consumers, policy makers, and legislators actively debate the cost of mobile tariff” the researchers urge, “data such as these are needed to inform policy decisions to enable everyone understand the need to increase tariff a bit, with a view to improve service and give mobile and internet access to more people across the country.”