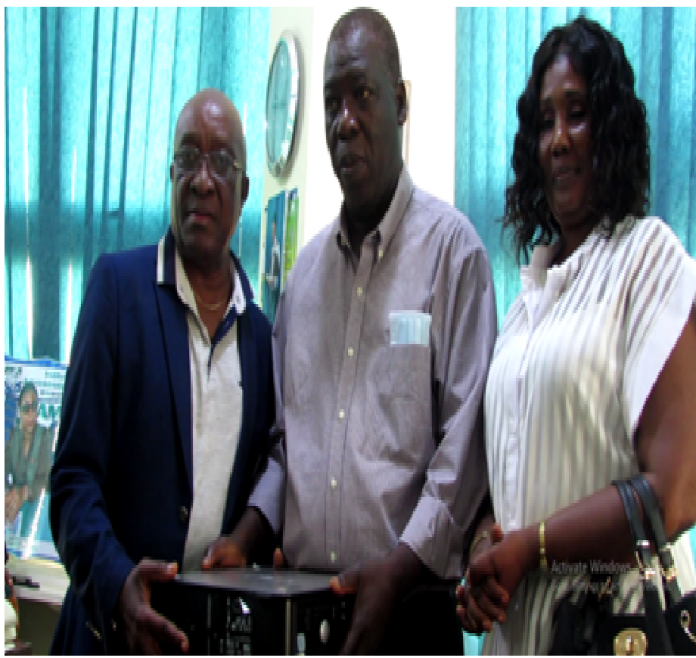 Professor Juldeh Sesay, based in the Diaspora yesterday 10th January, 2022 donated thirty computers and accessories to the Institution of Public Administration and Management (IPAM) to help improve the Institute’s Information Technology (IT) Laboratory.

Handing over the Computers to the Institution, Professor Sesay said he wanted to give back to boost education in Sierra Leone, where according to him, he acquired education next to nothing.

He said he brought some computers and accessories from the Diaspora on his way back home for donation to some institutions of learning and now the gesture has reached IPAM.

The Professor said after graduating as an Engineer and lectured for a period at the Fourah Bay College (FBC), he travelled to the Diaspora with no knowledge in operating a computer.

In order to avert this ugly development on upcoming graduates, he chose to pay back by equipping the USL with computers, while assuring that his next donation in two year time will be greater than this.

Deputy Vice Chancellor of IPAM, Professor Samuel Edmond Nonie said IPAM’s IT system is one of the areas the institution is lacking a bit and that for example they have the CISCO Academy which has been closed down because of the lack up to date equipment to run the it.

He said: “We have increasing number of students but we do not have enough computers so these donated computers are going to be important in equipping the lab, especially when we consider the new courses that we are trying to start in the next academic year.”

The donation, he rounded up, will help lightening IPAM’s load in equipping its younger brains, adding that the donation is very much needed and coming at the right time as IPAM is looking into reinstating its CISCO Academy which has gone moribund for 3 years now.

He said every student at IPAM does IT as part of their studies and that the donation will help delivered the Institution’s manifesto towards equipping its IT students.