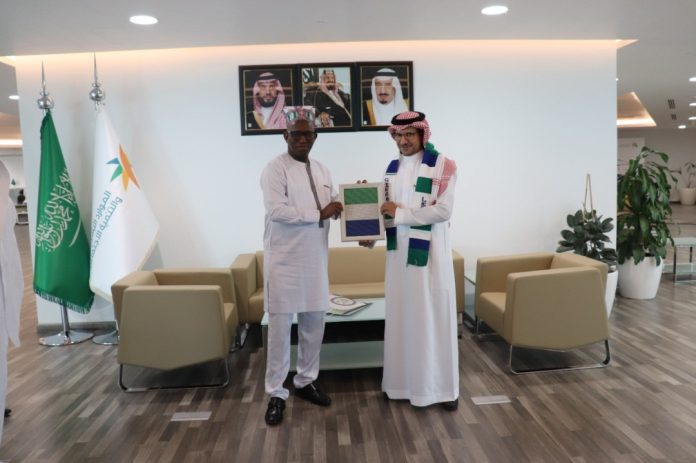 The Minister of Labour and Social Security of the Republic of Sierra Leone, Alpha Osman Timbo and the Vice Minister for Labour Affairs in the Kingdom of Saudi Arabia, Dr. Abdullah Nasser Abuthnain, have signed bilateral agreements for the recruitment of domestic and general workers between the two countries.

The two agreements which were signed at the Saudi Ministry of Labour in Riyadh by the two Ministers relate to the recruitment of domestic and general workers from Sierra Leone for both the Public and Private sectors in the Kingdom of Saudi Arabia.

Speaking at the ceremony, the Minister of Labour and Social Security of the Republic of Sierra Leone, Mr. Alpha Osman Timbo, said he was in Saudi Arabia on behalf of President Dr. Julius Maada Bio, the Government and the people of Sierra Leone to sign the “workers’ recruitment agreements” which the two countries had been working on for the past two years.

Mr. Timbo commended Sierra Leone’s Ambassador to Saudi Arabia, Dr. Ibrahim Jalloh and the Embassy for facilitating the process on behalf of the Government of Sierra Leone.

The Minister said the New Direction administration of President Bio believes in Human Capital Development, adding that Sierra Leone was looking forward to marketing its labour force globally, and Saudi Arabia was considered as one of those ideal places.

“Your Excellency, we believe with the signing of these agreements and ensuring that we regulate the process itself to ensure a smooth and orderly migration, both countries would benefit from the relationship. As a government, we believe in our people.

Our country is predominantly Muslim and most of the people aspiring to come and work in Saudi Arabia are also Muslims and we also share similar cultures and values,” Mr. Timbo assured.

He said he was confident that the two countries were sowing a seed that germinate to benefit generations yet unborn.

“Saudi Arabia values its bilateral relations with the Republic of Sierra Leone and we are pleased to gather here with you today on this special occasion for the signing of the recruitment agreements between our two ministries. These agreements would pave the way for fruitful bilateral cooperation in the labour field for both countries,” the Saudi Vice Minister for Labour Affairs noted.