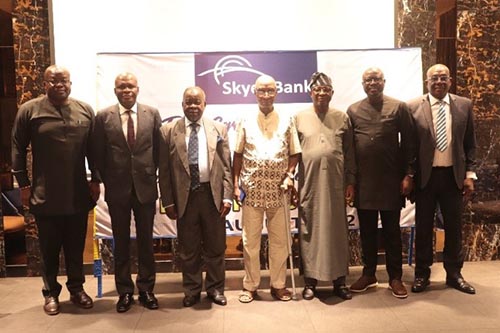 Skye Bank Sierra Leone bade farewell to its former Chairman of the Board and introduced new Directors and Managing Director at a ceremony held at the Atlantic Hotel Hall, Lumley Beach Road, on Wednesday, August 31, 2022.

The Acting Chairman, Hon. Brima Conteh in his opening statement expressed his thanks and appreciation to the out-gone Chairman who has ended his statutory tenure as prescribed by the Central Bank and has completed his work successfully.

“Turay has always been a natural leader and a team player. He encouraged management to work hard and bring in vigorous policies for the bank’s development. He has left a bank that has entered into internet banking and has products that compete in the banking industry,” he remarked.

Out-gone Chairman, Abdul Rahman Turay said he is happily leaving the bank to create a space for another person after six years in office. Skye Bank has gotten great potential and with the enthusiastic Managing Director and Board, they can take the bank to another level. He thanked all those who supported the bank throughout these years.

Giving a roadmap of the bank, Abiola Bolaji, Managing Director, said the bank operates in Sierra Leone and Guinea, noting that it has five branches in Sierra Leone, three cash points, and 84 employees.  Some of its products he said, include Cash points, loans and advances, international trade transfer, mobile money, remittances, and Internet banking platform. “In the coming months we will launch the mobile money banking app, corporate banking solutions, ATM machines, and MasterCard will be provided across our branches. We will open three more branches, and eight mobile cash points,” the New MD said and furthered that there is room for growth in Sierra Leone, which is a fertile ground for the banking business.

Bolaji revealed that only 12.4% of the population in Sierra Leone have bank accounts and only 1% have credit cards. “We have the capacity to grow and provide the required banking products and services,” he assured.

The Group Managing Director, Ayoku Liadi, described the new Managing Director as intelligent and enthusiastic.  “He is a team player that interacts a lot,” he noted and reassured that the bank will be the best bank in Sierra Leone with the current team in place. “We are extremely committed to putting the requirement needed to make Skye Bank Sierra Leone the most profit-making and fastest growing bank in the next 24 months,” he said.

Some customers present expressed nice sentiments about Skye Bank, describing it as efficient and credible. They thanked the outgoing Chairman for a job well done and congratulated the incoming Managing Director and Non-Executive Directors, hoping that their leadership will help the bank to continue growing.