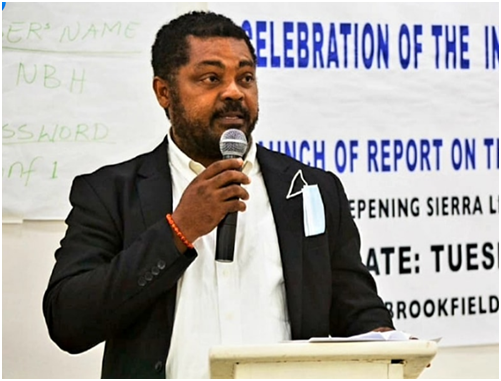 President of the Sierra Leone Association of Journalists (SLAJ), Ahmed Sahid Nasralla commonly known as De Monk, has encouraged the Chinese government to continue supporting the Sierra Leone media in all growth sectors.

He was speaking at the Chinese Embassy Information Salon 20th National Congress of the Communist Party of China (CPC) yesterday 26th October 2022 at the Atlantic Hotel, Lumley Beach in Freetown.

President Monk told his audience saying: “The media in Sierra Leone has benefitted immensely from the China-Africa Media Cooperation. Many journalists have benefitted (and continue to benefit) from study scholarships to China, short term courses and visitations. SLAJ and its affiliate bodies have also received logistical support from the Chinese Embassy in the form of office and media equipment”. See full speech of president Monk below:

Address by SLAJ President, Ahmed Sahid Nasralla, at the Chinese Embassy Information Salon on the 20th National Congress of the Communist Party of China (CPC

Let me start by thanking the Chinese Embassy in Sierra Leone for inviting me to serve as guest speaker at this special information salon focusing on the just concluded 20th National Congress of the Communist Party of China (CPC).

Congratulations to the CPC party on the successful convening of the very important Congress, which basically gives account of the previous five years and charts the way forward for the next five years for China.

Further congratulations to President Xi Jinping on his election as General Secretary of the 20th Central Committee of the Communist Party of China (CPC) at the Committee’s first plenary session, and for also being named Chairman of the CPC Central Military Commission.

Congratulations also to the new collective leadership of the CPC party which is charged with the huge responsibility to lead China to a better and very ambitious future.

And let me commend the CPC party for leading China to achieve great success over the past decade and for outlining a new blueprint for national transformation to create new historic accomplishments.

The election of Xi Jinping as General Secretary is a demonstration of confidence by the CPC party and the Chinese people of all ethnic groups that his leadership will continue to deliver on the collective aspiration of China.

Xi Jinping himself describes the 20th National Congress as a meeting of great importance as it takes place at a critical time as the country “embarks on a new journey to build China into a modern socialist country in all respects and advance toward the Second Centenary Goal”.

His report at the congress titled:“Hold High the Great Banner of Socialism with Chinese Characteristics and Strive in Unity to Build a Modern Socialist Country in All Respects”re-emphasises the need for China to continue to practice a political system that suits the context of China and the diversity of the Chinese people.

His report to the Congresshighlights 15 building blocks that will consolidate the strong foundation upon which China will continue to grow as a great nation, and from which, I believe, other ambitious nations could borrow a leaf.

Key among these blocks are:

And the part that I love most in Xi Jinping’s address to the Congress is where he stressed the need for the CPC to cultivate officials capable of shouldering the mission of national rejuvenation, enhance the political and organizational functions of Party organizations, take strict steps to improve Party conduct and enforce Party discipline, and win the tough and protracted battle against corruption.

So as Xi Jinping continues as leader we hope to see the cooperation and ties between China and Africa, and particularly Sierra Leone further strengthened.

FOCAC should continue to be an important and dynamic platform for China and Africa to carry out collective dialogue as well as an effective mechanism for practical cooperation on the economic and political fronts, while the CAMC platform continues to facilitate extensive and in-depth cooperation in the field of media exchanges.

For Sierra Leone in particular, China-Sierra Leone cooperation last year celebrated 50 years of friendship. This relationship has grown from strength to strength and it has been one of mutual understanding, respect and benefit. China’s bilateral support to Sierra Leone can be seen in the many infrastructural landmarks across the country; from roads to public office buildings, health, agriculture and mining sectors; during Ebola and now COVID-19, etc.

The media have also benefitted. Many journalists have benefitted (and continue to benefit) from study scholarships to China, short term courses and visitations. SLAJ and its affiliate bodies have also received logistical support from the Chinese Embassy in the form of office and media equipment.

Finally, let me conclude by thanking the Chinese Embassy for initiating this information salon platform which is now serving as a meeting point between the embassy and the media and CSOs to share information, promote cooperation and strengthen ties.

Once more congratulations to the CPC party for a successful congress, and we wish them well in pursuing their aspirations of the next decade.